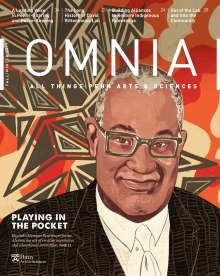 In this issue of OMNIA, our cover story follows the career and community engagement of poet, musician, and literary scholar Herman Beavers, whose students work alongside local high schoolers and West Philadelphia residents to study the works of famous playwright August Wilson. We also examine political scientist Brendan O’Leary’s lifework, from aiding in peace negotiations in Northern Ireland to advising the Prime Minister of Kurdistan. Other features include: an exploration of an initiative that moves brain research out of the lab and into the community; a look at a small and select cohort of students committed to solving energy problems; a profile of a partnership which builds alliances to restore Indigenous knowledge; and a retrospective on David Rittenhouse Lab, the setting for myriad scientific breakthroughs since 1954.