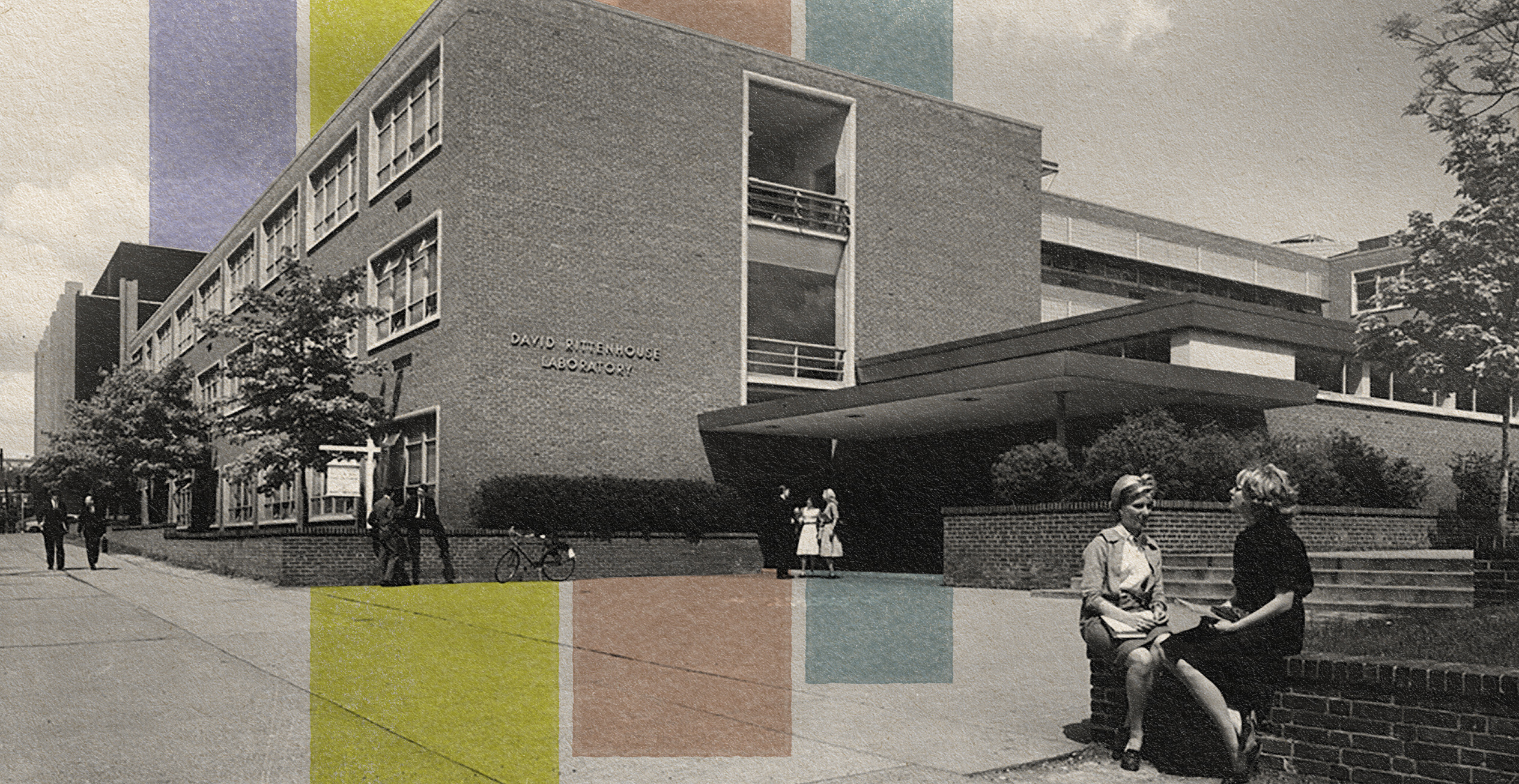 By David Brainard and Susan Ahlborn

Penn alums who return to campus often marvel at its transformation. Renovation projects have rejuvenated buildings like Fisher-Bennett Hall, the home of the English department and the Cinema Studies Program and one of the main teaching spaces on campus. The Perelman Center for Political Science and Economics, which opened last year, is a major hub for the social sciences. And the construction of the Carolyn Lynch Laboratory and the Stephen A. Levin Building have advanced the life sciences. Of the 26 buildings that house the people, programs and departments that make up Penn Arts & Sciences, nine are either less than 15 years old or have undergone major renovations in that time.

One place that has remained the same in the midst of all this change is the 65-year-old David Rittenhouse Laboratory (DRL). Since 1954, the Math department, along with Physics and Astronomy, has been housed here, at the southeast corner of 33rd and Walnut Streets. Built in two phases, DRL takes up 243,002 square feet and stretches for a city block. It contains the offices and labs of 86 standing faculty, as well as grad students and post-doctoral fellows, and it provides 20 classrooms used by departments across the School.

While the building itself might resemble a 1950s high school, the departments in it have a history of groundbreaking contributions to their fields. Math, as a cornerstone of not just science but of a broader liberal arts education, has continuously played a role in the instruction of virtually all of Penn’s undergraduates. Eight professors have been invited to speak—and one received a repeat invitation—at the International Congress of Mathematicians, the equivalent of a math hall of fame induction. The Physics and Astronomy department, which has recently seen its number of undergraduate majors triple, counts three Nobel prize winners in its family tree.

But a building with history is also a building that was not designed for today’s science. The year that DRL was opened saw the first mass inoculation against polio. Dwight Eisenhower was president, and a gallon of gas cost 26 cents. Since then, humans have gone from walking on the moon to seeing what a black hole looks like. New discoveries in math allow modern encryption and decryption. Nanotechnology lets us manipulate atoms.

DRL is the legacy of an era when government partnered closely with higher education and invested heavily in facilities. World War II had just demonstrated the vital importance of science, and the U.S. had entered the technological race of the Cold War. From Harvard to Stanford, a generation of facilities across the country reflect this boom.

Today, the National Science Foundation, the Department of Defense, foundations, and industry continue to fund individual research studies, and in some cases major scientific equipment. But government support for buildings themselves is now greatly reduced, and universities must find other ways to provide the modern facilities that can attract talented faculty and the graduate students that are the lifeblood of a good science department, to make possible cutting-edge research, and to facilitate excellence in teaching in the sciences.

Building modern science facilities of any sort involves unique challenges and great expense. The size and heavy use of DRL will make the effort to replace or update it particularly daunting. But to ensure a future at Penn for the Physics and Astronomy and Math departments that is as bright as their past, the conversations have begun.

Here, we take a brief look at DRL, the two departments it houses, and their distinguished past.

A Building in Two Parts

“Penn had really built nothing since the Depression set in,” says History of Art’s David Brownlee, coauthor of Building America’s First University: An Historical and Architectural Guide to the University of Pennsylvania. “The DRL showed a reinvestment in West Philadelphia and an engagement with the new scientific mandates of the late 20th century. And it’s our first building that really looks like a modern building.”

“It was in the spirit of what was being called the Philadelphia School. It’s a building for science that looks picturesque, not rational and regular and repetitive,” says Brownlee.

The new physics and mathematics building opens. It’s named after David Rittenhouse, an inventor, astronomer, professor, and surveyor, second in awesomeness only to his friend Ben Franklin. An addition is completed in 1967.

Physics and Astronomy gets funding from the Atomic Energy Commission to construct an accelerator with Princeton.

In Physics and Astronomy, Eli Burstein helps lead the creation of Penn’s interdisciplinary Laboratory for Research on the Structure of Matter. The center has been continuously funded and is currently led by Arjun Yodh.

Math’s Murray Gerstenhaber discovers an algebraic structure that will be named for him.

Humans land on the moon.

The first public-key cryptosystem is used for secure data transmission.

Voyager I and II launch.

Math’s Eugenio Calabi is inducted into the National Academy of Sciences for accomplishments including the development of the Calabi conjecture, which led to Calabi-Yau manifolds.

Physics and Astronomy’s Paul Steinhardt and his student Andreas Albrecht formulate the first viable inflationary theory of the universe.

Math’s Peter Freyd and his student David Yetter are co-discoverers of the HOMFLY polynomial, a knot invariant in the mathematical field of knot theory.

Math’s David Harbater coauthors a proof of Abhyankar’s conjecture, for which he shares the Cole Prize from the American Mathematical Society.

While filming A Beautiful Mind, Russell Crowe attends a Math Rademacher Lecture in DRL. No one notices.

In Physics and Astronomy, Raymond Davis shares the Nobel Prize in Physics for detecting cosmic neutrinos.

Following the arrival of Mark Trodden and Justin Khoury, Physics and Astronomy establishes the Center for Particle Cosmology to address questions about the universe and fundamental theories of matter and energy.

NASA confirms the presence of large quantities of water ice on the north pole of the Moon.

Andrea Liu of Physics and Astronomy identifies defects that mediate flow in solids ranging from crystalline to completely disordered, enabling microscopic understanding of how solids deform and ultimately break if pushed too far.

In Math, Florian Pop helps to prove the full Oort Conjecture on cyclic covers, while Ted Chinburg and David Harbater advance knowledge on the non-cyclic group.

Math’s Tony Pantev and Ron Donagi are selected to lead the Simons Collaboration for Homological Mirror Symmetry (HMS), a group exploring HMS and its applications.

Math’s Charles Epstein receives the Bergman Prize of the American Mathematical Society for fundamental contributions including his research on a relative index on the space of embeddable Cauchy-Riemann structures.

Physics and Astronomy’s Eugene Beier and Joshua Klein are part of the SNO collaboration that shares in a Breakthrough Prize for their work on neutrino oscillations.

Physics and Astronomy’s Mark Devlin and his group begin work on an 8,000-pound large aperture telescope receiver destined for the Simons Observatory in the Atacama Desert.

Physics and Astronomy’s Charles Kane and Eugene Mele receive the Breakthrough Prize for their work on topological insulators, which conduct electricity only on their surfaces.

Six years of observation of distant galaxies for the Dark Energy Survey ends, beginning world-leading cosmological analyses by Bhuvnesh Jain, Masao Sako, Gary Bernstein, and others in Physics and Astronomy.

We see a picture of a black hole. Everyone says, “Wow.”