Professor of German Simon Richter identifies a film genre where women claim their right to pleasure. 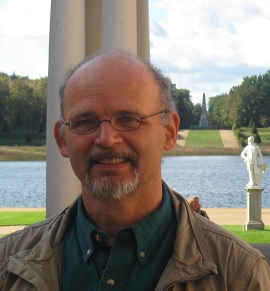 Eight years ago on a train to New York, Professor of German Simon Richter got into a conversation with a Penn colleague about all the cinematic Lolas they knew, from Marlene Dietrich in The Blue Angel to Gwen Verdon in Damn Yankees to Franka Potente in Run Lola Run. When Richter got home, he was curious enough to do a little research. Now—with help from some Penn freshmen—he’s written Women, Pleasure, Film: What Lolas Want, exposing and examining a distinct subgenre of cinema: the Lola film.

The first requirement for a Lola film, not surprisingly, is a woman named Lola. Although she is most frequently cisgender, she may also be transgender or a drag queen. But, “Just having a Lola doesn’t make it a Lola film,” says Richter. “It takes a little more.” He sees Josef von Sternberg’s 1930 film The Blue Angel, with Dietrich as Lola Lola, as the “ur-Lola” film to which all others refer back. He also believes the name choice was not random: “It was not possible in the 1920s to think of 'Lola' without being reminded of Lola Montez.”

Like Montez, a Lola film’s heroine typically chooses the name. Lola is usually a dancer (even in 1998’s Run Lola Run it’s all about her legs), and there is a scene that puts her “on stage.” Most important, says Richter, is that Lola enacts the female claim to pleasure with impunity. “The female right to pleasure existed, but in most cases, most countries, explicit or implicit censorship and mores meant that if a woman insisted on that right she had to be punished or to be a femme fatale, leading to ruin for herself or the people around her.” Lola is an exception to this rule: “Actor, director, and audience indulge this cinematic fantasy that her claim is legitimate and has to be honored, not punished.”

Early in his research Richter created a freshman seminar, Looking for Lola, where he and 20 students examined films, read Nabokov’s Lolita and a biography of Lola Montez, and studied cinema history and censorship. They were trying to decide if there was such a thing as a “Lola film,” and if so, what qualified. A second seminar covered more ground. “Both groups were crucial,” says Richter. “We tried ideas out and started to see the motifs crystallize.”

There is now an Argentinian Lola, a Chinese Lola, even a Lebanese-Egyptian Lola, 35 in all. In the U.S., though, Lola has not fared as well, despite the fact that the first attempt to create an American version came soon after The Blue Angel, with Jean Harlow in Bombshell. “It’s a screwball comedy,” says Richter. “It’s very, very good, but it illustrates how difficult if not impossible it is to be an American Lola. Her claim is lampooned, satirized or parodied.”

In the ‘80s, though, we got an American Lola with a twist. A French film with a “rather meek” Lola, Café au Lait, was a loose remake of Spike Lee’s She’s Gotta Have It, which had a much stronger female character. “I thought I should take one more look at Spike Lee’s original film,” says Richter, “and I realized her name is Nola. It’s brilliant. She’s the African American Lola.”

Richter believes the Lola film will continue to be a durable genre. “In the ‘80s Lola spread from Europe,” he says. “She went first to Mexico and started a really lively tradition of making Lola films in developing countries. My hypothesis would be that, as long as there are countries and cultures where women are disadvantaged and where their claim to pleasure is criminalized or made very difficult, Lola is going to be one way of exploring that, testing and exceeding limits in a fantasy form.”