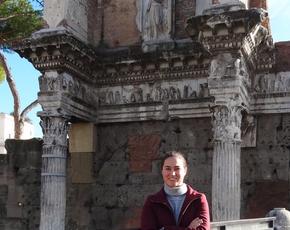 Ancient Rome’s Subura was not a place you would want be after dark. Juvenal described the area as having mille pericula saevae urbis, the “thousand dangers of a savage city.” It’s not the kind of place you’d expect the emperors of Rome to immortalize with monuments, but Art and Archaeology of the Mediterranean World doctoral candidate Margaret Andrews thinks that they did—in a way.

Generations of history students have been drawn in by lurid descriptions of what went on in the Subura; Andrews was one of them. “The Subura is something that every undergrad learns of when they take Roman history,” she says, “and instead of hearing about this politician and that law, it’s fun to hear about prostitutes and theft.”

Despite its fame, the area has never really been excavated. “We know it was lower class because contemporary authors described it as such,” she says. “The problem from my perspective as an archeologist was that we didn’t have any material evidence.”

This was partly because the Subura has been continuously occupied; “It’s not the sort of open area where you can dig to your heart’s content,” says Andrews. So she practiced a different kind of field work: asking people there if she could go into their basements and into church crypts. Most were happy to let her. “In Rome, they’re very proud of any piece of antiquity, but they weren’t expecting someone to be so interested in so little,” she says. “If I’d find an ancient wall, they’d say ‘It’s just a wall, not the Coliseum.’”

The evidence she unearthed surprised her, showing that wealthy people had once lived in the area. The Subura is in the center of Rome and contains one of its major roads; Andrews believes that its first residents included the elite who wanted to put their wealth on display. Over time, the population and traffic grew dense, and the drawbacks of the region—located in a valley where the water from the surrounding hills drained—became apparent, causing the wealthy to move to higher ground. The poor stayed.

The Subura was still in the middle of the city, however, right next to the Forum. This was a public relations problem for the emperors, who were each trying to leave his own stamp on the city. “They wanted their city to be shiny and bright, but while they’re beautifying the city center, they’ve got to deal with these people right next door.”

Traditionally Rome has been studied by looking at its monuments, says Andrews: “You look at the building programs of each emperor and see how they talk to each other over time.” Now she believes there is also a dialogue between those monuments and the people of the Subura. “A lot of artwork on the monuments there has to do with virtue, chastity, and moral rectitude,” she says. “This is right next to this notorious area of the city, where prostitutes are hanging out of the windows, trying to entice clients. It’s not coincidental.”

“The lower class had agency which affected and in some cases directly determined the kinds of monuments that were built, where they were located, and what their decoration was,” says Andrews. “I didn’t go in thinking I’d find this. Rome is one of the most-studied places on earth, yet you can still be surprised.”