Zachary Lesser, Edward W. Kane Professor of English, used ghosts, holes, and scrapes to learn more about how Shakespeare’s work was seen in his own time. 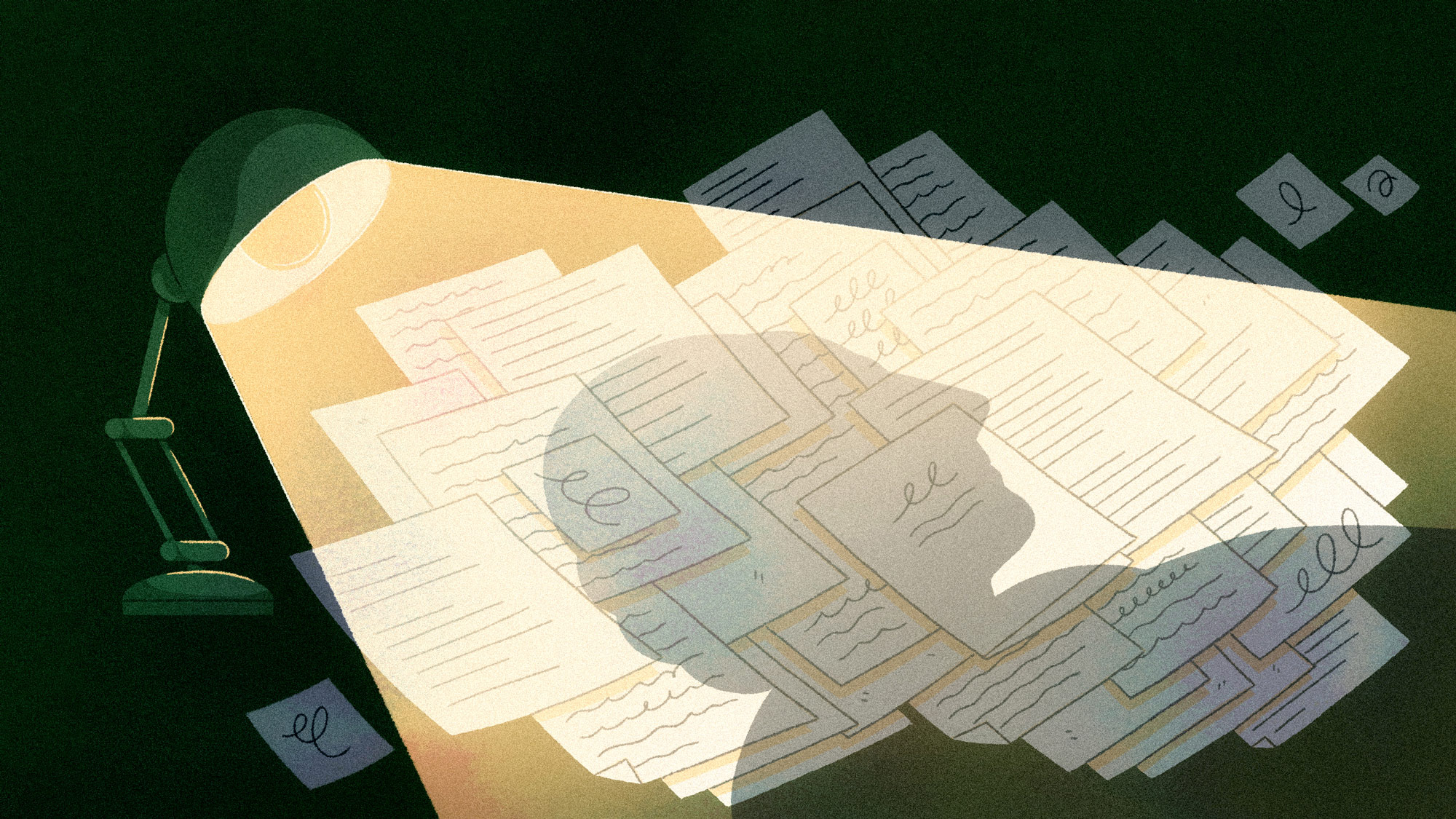 Seven years ago, Zachary Lesser went down a rabbit hole that led to him examining 350 copies of Shakespeare’s plays all over Europe and the U.S., and ended with him writing a book about what he learned. Ghosts, Holes, Rips and Scrapes: Shakespeare in 1619, Bibliography in the Longue Durée challenges some long-held perceptions about how Shakespeare was seen in his own time.

Lesser, Edward W. Kane Professor of English, had just taught a class with Peter Stallybrass, now an emeritus professor of English. They used the 1619 Pavier Quartos, the first collection of Shakespeare’s work, to address questions of authorship, style, and the history of publishing and reading.

It started Lesser thinking more about the history of these quartos, which can be seen as a kind of bootleg collected works. Analytical bibliographers examining the texts in the early 20th century realized that the copies, despite having different dates and printers’ names, had all been printed at the same time by the same person. Since then, scholars have believed that a publisher named Thomas Pavier put out the collection in 1619, but Shakespeare’s acting troupe, the King’s Men, asked the Lord Chamberlain to issue an order forbidding the printing of any their plays. (It’s been thought that the King’s Men didn’t want to be scooped, since they put out their own grand edition of collected Shakespeare—the famous First Folio—four years later.) Following the Lord Chamberlain’s order, Pavier put false dates on his plays and split them up to make them look like leftover copies of early editions.

Since then, no one has gone back to look at the texts themselves. Over five years, Lesser did just that, examining about 350 copies in about 35 libraries from London to Geneva to Fort Worth, Texas, to Penn Libraries’ own Kislak Center. “Analytic bibliography is the study of textual objects,” he says. “It’s a kind of forensic analysis of books.” It was work that had to be done in person. “The ghost images I talk about are really hard to see on the page. You have to squint and make yourself cross-eyed a bit to see them.”

He also worked with the librarians to learn more about the history of the books and their conservation, saying, “The book would not be the book it is if not for the work that all of these librarians and curators did and the kind of expertise that they brought to the table.”

The result is Ghosts, Holes, Rips and Scrapes: Shakespeare in 1619, Bibliography in the Longue Durée. “Ghosts” are faint images caused by the interaction of ink on a page as it's pressed up against another for a long time. “Almost all of these plays have been bound, rebound, reconditioned, particularly in the 19th century,” Lesser says. “What these ghost images tell us is that at some previous point in their lives they were bound next to another book.” He found ghosts of title pages that let him reconstruct a census of lost bound collections and conclude that many more copies of the Pavier Quartos were sold as a bound set than previously thought.

Holes are the tiny slits deep in the gutter margin that show the play was once sold as a small work that was sewn together rather than being bound. Readers of the time would often buy plays individually and eventually put them together into their own bound editions.

Using these ghosts and holes, Lesser discovered that a play not by Shakespeare, A Woman Killed with Kindness by Thomas Heywood, was often sold as part of the Pavier Quartos. “The Pavier Quartos have always been seen as the first attempt to collect the works of William Shakespeare, but now we have to reckon with the fact that there was a Thomas Heywood play in there,” he says. This may have been another effort to get around the prohibition by the Lord Chamberlain, but it also shows that people didn’t find it odd to have someone else’s play included, nor did they immediately remove it.

Rips and scrapes are signs that the already falsified date was further disguised by being scraped off with a knife or just ripped off, indicating to Lesser that someone felt the books needed to be disguised in an ongoing way.

Lesser also concluded that Thomas Pavier was not actually the main agent behind the so-called Pavier Quartos, but rather the printers William and Isaac Jaggard. “To some extent, that's just a minor shift of cast of characters, but it's important in the history of Shakespeare because the Jaggards also printed the First Folio,” he says. Earlier scholars wanted to downplay the role of the Jaggards in this pirate collection because they wanted to establish that the plays in the First Folio could be considered Shakespeare's genuine works.

“Once you say, well, the same people were printing that who were printing this bootleg version, which has plays that aren't by Shakespeare, which has versions of some of Shakespeare's plays that seem like they might not be authoritative versions, then you start to muddy the waters over the texts in the First Folio,” says Lesser. He thinks that modern scholars have been more invested in the distinction between this 1619 collection and the First Folio than the King's Men or book buyers were at the time.

“The King's Men wanted to make sure that this collection didn't scoop their First Folio or compete with it,” he continues. “But since a lot of copies circulated, I now don’t think that they were so upset about it once they had forced it to be reshaped so that it no longer looked like the kind of thing they were doing.”

Lesser believes scholars have emphasized the distinction because of Shakespeare's canonization as an author. “Theatrical texts have a lot of collaboration in them, and the history of Shakespeare editing has been all about trying to discern a way to find the texts that came out of his pen,” he says. Today’s scholars are less concerned with figuring out exactly what Shakespeare wrote, which Lesser believes is ultimately going to remain impossible.

Ghosts, Holes, Rips and Scrapes reads like a detective story, but Lesser cautions that this can also lead to false conclusions. “It pushes you towards this kind of perfect Agatha Christie-type narrative, which can mean that you don't see certain things that are loose threads or that don't fit as well. Certain pieces of evidence become visible or invisible depending on the context in which we're viewing them, on our own presuppositions, on our own narratives that we bring to the study of these books.”

He's also fascinated by what could have been, if the 1619 collection had succeeded in its original form and scooped the First Folio. “How would Shakespeare look different? There's something about how things can disappear and return in unexpected ways when we look at these objects differently, or when, through chance, something survives or doesn't survive, that I think is really fascinating, because it suggests the accidental nature of a lot of our literary history. Things could've turned out very differently.”

Lesser’s work is part of a new trend in scholarship to explore the unique features of individual copies of early editions. To facilitate this, he worked with Adam Hooks of the University of Iowa and Scott Enderle, Digital Humanities Specialist at Penn Libraries, to create the Shakespeare Census website, an attempt to locate and describe all existing copies of all editions of works attributed to Shakespeare through 1700. It’s the first Shakespeare census since the 1930s, and, of course, the first digital census. Scholars can use it to look for editions with marginalia, for example. They can search for copies owned by women, or for which plays were bound together by different readers.

He also hopes that others will use the design of the site to create censuses of other authors’ works. “Scott Enderle, who is the developer of the site, was a Penn English Ph.D. and now works for the Price Lab and the library. He developed it really beautifully so that it's completely portable, and it's really available to anyone who wants to use it for a census of someone else.”

Check out the Shakespeare Census here.