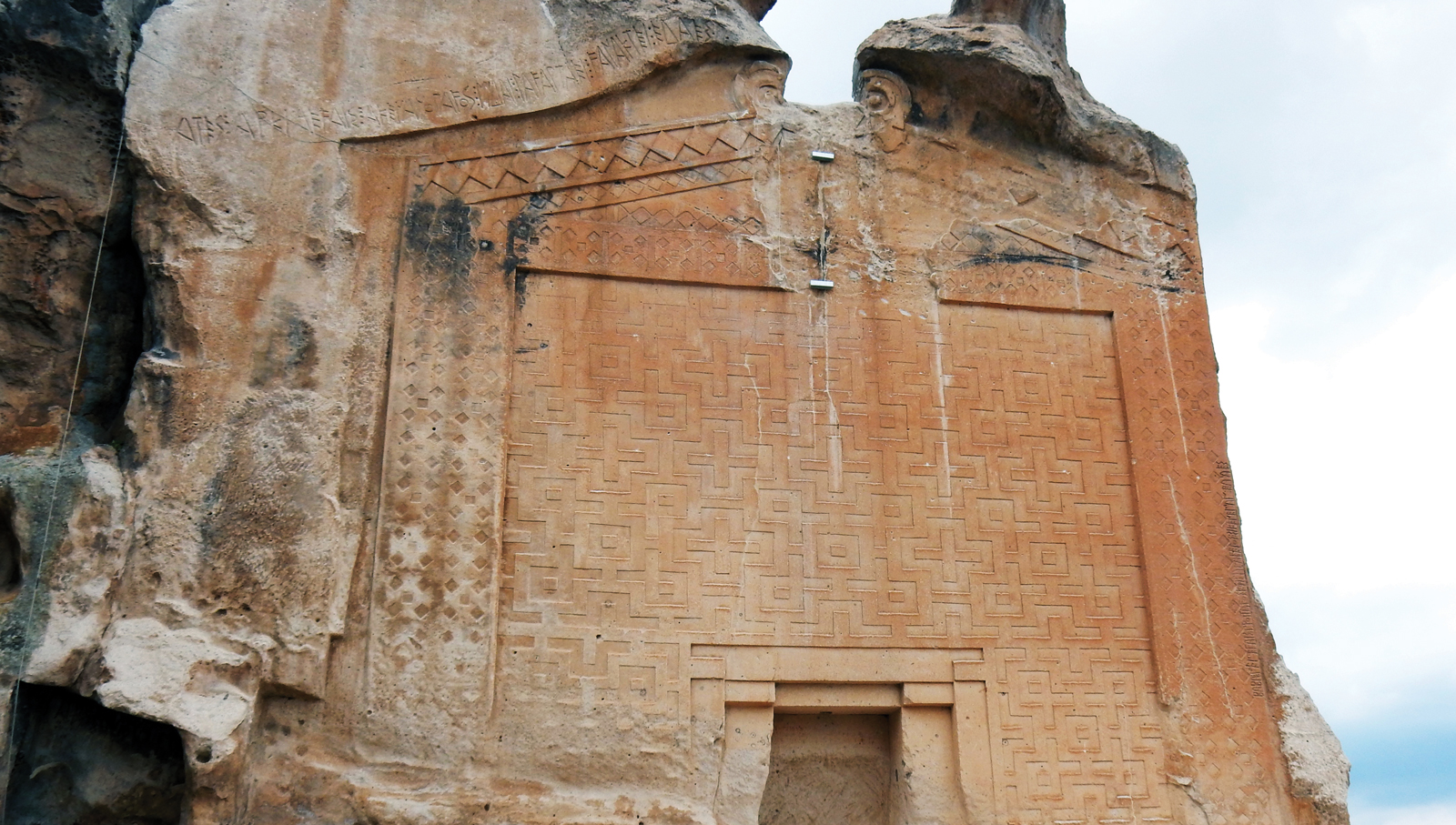 Ancient Armor, A Mysterious Royal Tomb, And A Pair Of Massive Stone Gates At Gordion

Brian Rose, James B. Pritchard Professor of Archaeology in the Department of Classical Studies, and his team’s recent excavation at a historic site in central Turkey was one of the most successful in history.

When Brian Rose and the Gordion archaeological team in Turkey began excavating a tomb this past summer, they expected to uncover the remains of a king.

“Anyone who leaves the ancient citadel has his or her eyes directed squarely toward this tomb. Obviously, it’s someone of critical importance to the life of Gordion,” says Rose, James B. Pritchard Professor of Archaeology in the Department of Classical Studies.

Instead, the researchers got a surprise: Inside the tomb lay the remains of a woman in her mid-20s, along with a child eight or nine years old and more than 600 amber beads. The find was remarkable not just for the fact that the grave contained multiple occupants, but because one of them was female and surrounded by gems that likely came from 1,500 miles away.

For seven decades, the University of Pennsylvania and Penn Museum have conducted work at Gordion, a historic site in central Turkey that includes nine settlements, one atop another, and spans about 4,000 years. It was the capital city of the ancient kingdom of Phrygia, whose most famous king, Midas, reportedly had a golden touch. Rose has been in charge of the project for 13 seasons. The most recent, which ran for 10 weeks in the summer of 2019, was one of the most productive ever.

Beyond the noteworthy tomb discovery, ceramic vessels and an iron-and-bronze breastplate helped the researchers push back a building’s date by 100 years, marking it as a palace for Gordion’s rulers and not the residence of a Persian governor. The Penn team also located the citadel’s South Gate, likely used as the principal entry point for 1,300 years, and finished preserving the East Gate, more than 33 feet high, which had been damaged in a recent earthquake.

Gordion’s monumental citadel mound, about 55 feet tall, lies in the middle of the ancient city, which was enclosed by an extensive system of stone and mudbrick fortifications, still mostly buried. Remote sensing has revealed buried residential settlements to the north, south, and west of the central mound. The citadel had its own fortified perimeter, and the most important buildings were located there. Outside the city are 125 burial mounds, about a third of which have been excavated.

Though Gordion has been studied for three-quarters of a century, plenty of outstanding questions remain. One Rose hoped to answer focused on the site’s layout. “I was interested in determining more clearly the plan of the citadel mound, which had never been a focus of earlier excavators,” he says. This included excavating a tomb beyond the East Gate.

It’s very rare to have a monumental tomb for a woman in the 8th century BCE, and it’s rare to have two occupants.

The sight line from the original gateway structure led to Gordion’s oldest burial mound, which dated from 850 BCE. But after a fire around 800 BCE, residents rebuilt the gate, slightly shifting its orientation toward the tomb excavated last summer by Rose and colleagues from the Museum of Anatolian Civilizations in Ankara. Considering the mound’s prominence and size, the researchers thought perhaps it contained the body of a king.

The mound is large, more than 45 feet tall and 345 feet across. Inside, despite structural collapse and looting, many items were preserved: leather belts with metal studs set around a copper alloy disc or with decorative bronze plate attachments, at least 20 elaborate bronze clothing pins, bronze bowls, a ladle, and ceramic food-storage containers. The archaeologists also found hundreds of amber pieces—the largest and earliest known collection of this material at Gordion.

But the pair of human remains, the woman and young child, were what really caught Rose’s attention. “It’s very rare to have a monumental tomb for a woman in the 8th century BCE, and it’s rare to have two occupants,” he says.

Given the connection between the citadel’s East Gate and the tomb chamber, these were certainly key figures in Gordion, likely royalty, even though their identities aren’t yet known. They may never be. “These finds were made at the very end of the season,” Rose says. “When we go back, we’ll do more examination of the bodies and hopefully learn more about the lives of these individuals, who were clearly important in the life of the city.”

What The Armor Reveals

Digging in another part of the complex revealed a new twist on a building initially dated to the middle of the 6th century.

Much of the area near the South Gate had been excavated in the 1950s by the team led by one of Rose’s predecessors at Penn, archaeologist Rodney Young. A structure there, dubbed the Mosaic Building, was like nothing else uncovered in Gordion. It had an enclosed vestibule that opened into a paved courtyard, which led to another vestibule and two more rooms. Each featured blue-and-white pebble mosaic floors.

Young believed the building had housed a Persian governor. But after reanalyzing pottery from the original excavation, Rose’s team drew a different conclusion, one bolstered by the new discovery of two large pieces of armor: The building was likely 100 years older than previously thought.

This armor was worn by the protectors of Gordion at the time when the Persians attacked the city. Finding armor this substantial from that time period is extraordinary.

“It was probably the palace of the rulers of Gordion in the early-6th century BCE,” Rose says. “Next to it, we found this breastplate. This armor was worn by the protectors of Gordion at the time when the Persians attacked the city. Finding armor this substantial from that time period is extraordinary.”

Unlike modern armor, the breastplate isn’t solid or flat, but rather made from hundreds of tiny overlapping metal scales, sewn to a backing. To the untrained eye, it could be mistaken for an object that came from the sea rather than from underground. The archaeologists immediately recognized they’d encountered something fascinating and substantial.

Research Amidst the Pandemic

Brian Rose, James B. Pritchard Professor of Archaeology in the Department of Classical Studies, reflects.

This is the first time in forty years in which I’m uncertain whether there can be a summer excavation season due to the COVID-19 pandemic. Turkey has not cancelled field projects, and a few of them continue to operate, but new directives from the Ministry of Culture and Tourism specify that for the foreseeable future, fieldwork should be limited to study, rather than excavation. No visitors to excavation sites are allowed and dig houses (excavation headquarters) must be regularly disinfected. Whether these conditions will continue into the summer, or become even more stringent, is unclear.

We’re scheduled to begin work at Gordion on June 10, 2020, over two months from the time of this writing. My hope is that we will still be able to have a season of some sort, but it may not include excavation, nor may it be as long as I’d planned on, which is 10 weeks. Every archaeologist I know is experiencing the same doubts about their field projects this year, and many summer study-abroad programs in the Mediterranean have already been cancelled. Most of us continually try to situate ourselves in diachronic perspective: no one could plan for the future during the plague of Athens in 430 BCE, or the Justinianic plague in 540 CE, or the so-called Black Death in the mid-14th century. But that doesn’t make it any easier.

They already knew the pottery Young had found dated to the first half of the 6th century, but other clues placed the armor in that timeframe, too. For one, a meander design—a decorative border constructed from a continuous line, shaped into a repeated motif—created by the arrangement of the bronze scales resembled the mosaic floors of the nearby building. Beyond that, the artifact itself bore a striking resemblance to protective gear shown on a late 6th-century cup depicting Patroclus, a warrior and companion of Achilles. Finally, other pieces of armor with a similar timestamp had been discovered on Cyprus.

The proximity of the armor to the Mosaic Building meant Young had likely gotten the timing wrong all those years ago. “Putting the armor into the first half of the 6th century BCE meant it was jettisoned at the time of the Persian attack,” Rose says. “Originally, the building had been dated after the Persian conquest, but now, we’ve been able to move it back.” Rose says in the future, he plans to expand the trench to look for additional armor.

A Tale Of Two Gates

Rose mentions two other successes when describing the most recent fieldwork season. The first entailed uncovering more of the citadel’s South Gate, “which became the principal gate through the late Roman period,” he explains. This project has been ongoing for seven seasons, and most recently included the discovery of a stone-paved ramp and more of an approach road Rose initially discovered in 2018.

“It has the longest approach road of any citadel gate that’s ever been found. The city’s defenders wanted this road with high walls on either side, because the longer your approach road, the harder it is for your enemies to get into the citadel.” Such a defense system, he adds, was far more sophisticated than the researchers had imagined would exist at Gordion.

The second success capped off a long-term architectural conservation project of the 33-foot-tall East Gate, which had been badly damaged in a 1999 earthquake. For five years, the Penn team painstakingly removed 112 of the most severely cracked stones one by one, repaired them, then replaced them in their original spots.

The city’s defenders wanted this road with high walls on either side, because the longer your approach road, the harder it is for your enemies to get into the citadel.

According to Rose, the work should ensure the gate’s stability into the next century, even if another earthquake occurs. “If we hadn’t moved, consolidated, and reinserted the blocks in their original locations,” he says, “they would have gradually crumbled, and the entire wall would’ve fallen.” None of this work, he adds, would have been possible without the support of the Turkish Ministry of Culture and Tourism and the Museum of Anatolian Civilizations.

Any director of an archaeological sites hopes for such a productive and informative season. Yet it inevitably leads to more questions. Who were the woman and child in the tomb? Is there more armor to locate? There’s plenty more landscape still to explore. With each season, the historic people of Gordion reveal more of themselves, their lives, and their ultimate fate.