A Visit from Jennifer Egan 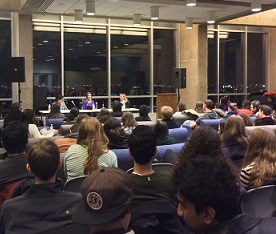 On January 23rd, nearly 170 undergraduates traversed the snowy campus to converge at Heyer Sky Lounge and discuss a book. The occasion was the Winter Reading Project, organized by the English department’s undergraduate advisory board to engage students in reading over the winter break. For the first time in its 10-year history, the book selection—A Visit from the Goon Squad—was written by a College alumna, and in another first, the discussion included the author, Jennifer Egan, C’85.

The novel, which won the 2010 National Book Critics Circle Award and the 2011 Pulitzer Prize, spans the late ‘60s to the near future and focuses on a set of loosely interrelated characters in and around the music industry. It was hailed by critics as an experimental—one chapter is a PowerPoint presentation—yet accessible work. “Someone asked me what Goon Squad is about,” said Kate Herzlin, C’14, co-chair of the English Undergraduate Advisory Board (UAB), “and I gave them 30 different answers but it all feels true. There’s just so much to say about it: how it deals with time and music and the threads that connect our lives.”

Students had the opportunity to pose their questions to Egan, with Assistant Professor of English Jean-Christophe Cloutier and Senior Lecturer and novelist Kathleen DeMarco Van Cleve adding academic context and questions of their own. While the discussion began with a simple question—what the repeated colors in Goon Squad signify—Egan’s answer gave insight into her writing process:

“There’s a lot of strange symbolism I wasn’t thinking about consciously in this book,” she said. “Someone performed an analysis with regard to Greek mythology, which was sort of amazing, and presented it to his students in front of me as if to say, ‘Of course this is what she meant’ and all I could think was, ‘My God, what a great idea!’ Thank God for the unconscious: It’s so much smarter than I am. If I sense that it’s doing its job I leave it alone. When it feels off-kilter and needs work, which is most of the time, that’s when I get involved.”

From her decision to focus on music and time to her research and revision process to playing with the colors on the website version of the PowerPoint chapter, students got a glimpse at how Egan created and now interprets the novel. After the discussion they were bubbling with praise for the event. Hardik Gupta, C’14, ENG’14, said, “What I liked was learning more about her writing process, especially regarding the PowerPoint chapter: that that part of the story could have only been told through PowerPoint.”

Michael Gamer, Associate Professor of English and Undergraduate Chair, said of the event: “I think this kind of discussion reminds students that we are, first and foremost, participants in living culture, and that the distinctions between ‘elite’ and ‘popular’ culture we hear so much about are pretty artificial and, in the end, false. If the response to Goon Squad teaches us anything, it's that ‘experimental’ novels about ideas can be—and usually are—also ‘popular.’”

The Winter Reading Project was started by two Penn English alumni, Anna Black and Adam Levin, who ten years ago thought it would be a good idea for the UAB to choose a book and offer free copies to interested students who could read it over break and then assemble to discuss it in January. Prior Winter Reading Project topics include Toni Morrison’s A Mercy, Junot Diaz’s The Brief Wonderful Life of Oscar Wao, Vladimir Nabokov’s Lolita, and Truman Capote’s In Cold Blood. This year the project was co-sponsored by the Provost’s Office to coincide with the Year of Sound. Attendance of the event doubled and diversified, with undergraduates from all over Penn participating.