By B. Davin Stengel 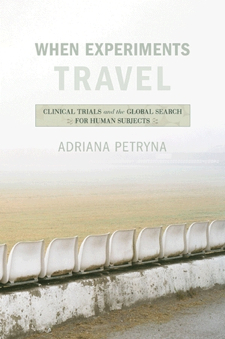 In her new book, When Experiments Travel: Clinical Trials and the Global Search for Human Subjects, Associate Professor of Anthropology Adriana Petryna takes as her subject the recent history and current state of the clinical trials industry. Focusing on sites in the United States, Poland and Brazil, she examines and evaluates the concerns and conduct of diverse participants—ranging from trial subjects, scientists and health professionals to policymakers and drug development executives. Globalized clinical trials are part of charged social and political landscapes, Petryna explains, enfolding public and private actors and involving a host of calculable and incalculable hopes, benefits, profits and risks.

"Americans and Western Europeans are increasingly unusable from a drug-testing standpoint. That's in part because we use too many drugs. Our bodies produce too many drug-drug interactions and are less able to show evidence of specific drug effectiveness." - Adriana Petryna

Q: Your previous book, Life Exposed: Biological Citizens After Chernobyl, concerned a very specific geographic area. How did you first become interested in this global industry so defined by its unboundedness?

Petryna: Chernobyl was unbounded in its scope and effects also. The technical and medical realities it unleashed exceeded the logistical capacities of any single agency or state to bring it under control. Generally speaking, I am interested in the myriad ways in which science and technology are integrated into public policy, particularly in contexts of crisis and stark inequality. Studying the aftermath of Chernobyl attuned me to the stakes of scientific knowledge at key moments of political and economic change.

In 2000, when I was in Ukraine doing follow-up research for Life Exposed, I saw how pharmaceutical markets were rapidly expanding in Ukraine and neighboring countries. I vividly recall a lavatory in the clinic where I was working that was stuffed with drugs—many were expired—and medical supplies donated by western manufacturers and philanthropic organizations. Doctors and patients were using these drugs in a kind of trial-and-error way to learn about their effectiveness. A largely discredited Soviet pharmacopeia now coexisted with an incipient and unregulated market for Western pharmaceuticals. The clinicians I knew were also keenly interested in running clinical trials, which they hadn’t done before. They were looking to Poland, where clinical trials were rapidly becoming part of health delivery, and hoping and anticipating that the clinical trials wave would reach them soon. When Experiments Travel builds on these insights to create a comparative ethnography of the globalized trial.

There’s a long, important history of the evolution of research ethics—stemming back to the Nuremburg trials—focusing on protecting patients and making sure that they’re informed about experiments, making sure first and foremost that they know that they’re in an experiment. But what I was seeing, and this is not anything intentionally adverse, was a kind of rewriting of the very idea of the clinical trial as a social good in its own right. In the late 1990s, drug firms were providing via clinical trials about one third of all oncologic drugs used in Poland, for example. Clearly clinical trials were becoming a kind of surrogate to decrepit or poorly managed health care systems, but what are the implications for patient protections? What about the blurring of research and medical practice? How do the results of experiments strengthen or undermine the delivery of affordable and effective interventions? Who is ultimately responsible for the experimental subject’s well-being, both immediate and long-term? These are the sorts of issues that I explore in When Experiments Travel.

Q: In terms of growth and offshoring trends in the entire clinical trials industry, is it a story of established sites getting bigger, with new sites cropping up and the whole network growing? Or is it more complicated than that?

Petryna: At the moment, pharmaceutical sponsors are engaged in a turf war over human subjects. The contest is not only about the number of subjects a company can recruit. It is also about recruiting subjects quickly. The clinical trials industry has boomed, first and foremost, because of the sheer number of trials being run. Second, U.S. regulators are asking for diverse and larger numbers of patients to be included in clinical trials. Third, competition to get drugs approved and to bring them to market first ramps up the search for subjects. Also, interestingly, the available pool of human subjects in Western pharmaceutical markets is shrinking. Americans and Western Europeans are increasingly unusable from a drug-testing standpoint. That’s in part because we use too many drugs. Our bodies produce too many drug-drug interactions and are less able to show evidence of specific drug effectiveness.

In my research, I specifically looked into the work of contract research organizations (CROs), which claim to make up about half of the workforce in drug and medical product development.  CROs organize and monitor different aspects of global clinical trials and, among other things, guide clients through complex national regulatory environments. The professionals I spoke with took pride in their work. They also knew firsthand about some of the pitfalls of the competitive structure of drug development, including serious problems with research integrity. We have heard a lot lately about  safety problems of some new drugs being detected only after regulatory approval. In many ways, this failure to predict safety outcomesaccompanies the offshored clinical trial. My book tries to distill how the many parties involved deter harmful practices and account for the problems that continue to plague drug safety.

In terms of trends, trial professionals were also concerned with the lifespan of the research environments they helped to construct. They talked about some trial markets in eastern Europe having maybe 10 years left, and then the industry would have to move, eastward in this case. Trial markets become exhausted. Too many companies start to compete for high-quality investigators and national regulations mature and make more demands. But by this stage the industry has moved elsewhere, where the stampede for loyal subjects and investigators begins anew.

The geography of clinical testing is also dependent on pharmaceutical growth. The so-called pharma-emerging countries—India, China, Russia, and Brazil—are now popular trial destinations. No doubt clinical trials facilitate the entry of new and high-cost medicines in these countries after the trials end, altering notions of best care and patient demand. But they also raise massive challenges with respect to public health and what constitutes the right to health more generally.

Q: In the book you write that over the past several decades the clinical trials industry has grown into a “largely uncharted field of global experimental activity” that is sometimes “beyond what established regulations can control or even keep track of.” What are some problems that have emerged because of these challenges to oversight and regulation?

Petryna:  In 2005, about 40 percent of all trials were carried out in new areas, up from 10 percent in 1991. As the clinical trial enterprise becomes more decentralized, it also becomes more difficult to track. In the book I write about the World Health Organization’s efforts to create an international clinical trial research platform that would gather data about all ongoing clinical trials into a central registry. The initiative was announced in the wake of scandals involving the suppression and selective reporting of results of trials of several popular drugs that benefited proprietary interests and undermined public health. Figures are inconsistent, and a 2007 Office of Inspector General report concluded that the FDA inspected only one percent of clinical trial sites between 2000 and 2005. It also notes inadequate oversight of clinical trials in the U.S.

The World Health Organization hopes to register clinical trials along with protocols according to certain criteria, so that we, meaning the public, know which trials are going on throughout the world. A global databank is important, as it could help reduce redundancy in research, afford access to data about safety and to the results of prior research, and allow better targeting of research priorities, among other things. There’s been resistance on several fronts towards this kind of transparency. Clinicaltrials.gov is a very good example of a registry that is working with the World Health Organization, but clinical trial protocols and data, from a regulatory perspective, are still considered proprietary. So at the moment there is no real centralized registry through which we can get a handle on the scope of this experimental enterprise.

Q: What changes do you expect, or hope to see, in the pharmaceutical and clinical trials industries in the next few decades?

Petryna: No doubt, pharmaceutical innovation greatly contributes to the alleviation of disease. And a lot has been said though about the “drug pipeline” drying up, and fewer and fewer new molecules making it through the clinical trials process. We need a robust public debate about what constitutes innovation and effective public-private partnerships.  We also need to find ways of better assessing drug effectiveness, safety, and value.  We might have to change the way we think about clinical research. The era of the high-cost mega-trial, for instance, where thousands of people are studied in order to detect a relatively minor statistical difference, may be on the wane.

Information systems and the auditing and oversight of trials at home and abroad must be improved, to be sure, and risks and harmful practices must be disclosed and deterred.  But we also need alternative international frameworks for drug pricing and intellectual property—frameworks that would address the needs of the developing world and provide a more cogent social imperative to guide innovation. Local researchers and scientists should have a more active voice in the design of trial protocols. And, if we’re going to go down the entire chain, patients have to be better informed about the trials that they’re taking part in. They need to know whether the research is important from a scientific and public health perspective, and whether the clinical trials process will facilitate affordable and effective medications. In Brazil I specifically looked into the aftermath of clinical trials, when crucial issues such as the continuity of treatment must be systematically addressed.

Innovation requires flexibility, it’s a mobile that looks very different depending on the vantage point you take.  And many individuals, social entrepreneurs, physicians, and scholars are creating new models of innovation to bridge the gap between the haves and the have-nots. My students and I discuss many of these issues in my courses on medical anthropology and global health at Penn. It’s inspiring to see a generation of global health scholars looking at the nexus of new medical technologies and the global burden of disease from an interdisciplinary perspective: anthropology, history of science, business, and medicine. We need to keep evolving a nuanced and constructive understanding of a global medicine that so profoundly shapes people’s chances at life.