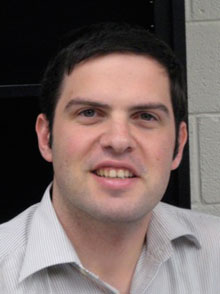 Mathematically, the black hole at the center of the Milky Way is deceptively simple. With four million solar masses of matter condensed into an infinitely small volume, this object is essentially a point with massive gravitational attraction. Yet the study of black holes has raised more questions than it has answered, on everything from the dimensions of our universe to the very nature of gravity.

"Black holes really represent the epitome of physics," says theoretical astrophysics doctoral student Amitai Bin-Nun. "They are very simple systems that result in all sorts of rich and deep mathematical structures and an unending chain of complications."

With assistance from Justin Khoury and Ravi K. Sheth, both members of the Department of Physics and Astronomy faculty and of Penn's Center for Particle Cosmology, Bin-Nun has been exploring how the enormous gravitational force of a black hole can distort the light from objects around it. He recently published a paper in Physical Review D detailing a technique he developed to measure gravitational lensing—or the bending of light by matter—of stars surrounding a black hole.

"Imagine straight ahead of you a black hole, and off a little bit to the right and behind is a star," Bin-Nun explains. "Light is going out in all directions from the star. Some will come almost straight to us, and this is called the primary image. Simultaneously, you'll also see the light that bends around the black hole. So, instead of seeing one star, you'll actually see the illusion of it appearing twice in the sky. This secondary image will be significantly fainter than the primary image because only a little bit of the light is bent sufficiently to get to us."

Bin-Nun simulated the orbit of star S2, which travels near the Milky Way's central black hole, to find out how the black hole affects S2's secondary image in two different scenarios. In one, the black hole has four dimensions, as described by the theory of general relativity. In the other, it behaves according to the Randall-Sundrum model, one of a group of theories developed since the mid-1990s that assume the existence of extra dimensions that apply only to gravity.

A primary motivation for the development of these theories is figuring out why gravity is so much weaker than the other fundamental forces of physics. Bin-Nun says, "If gravity alone is leaking into extra dimensions, it can fundamentally be as strong as the electroweak force [a unified theory, confirmed since 1983, of the electromagnetic and weak forces], but appear to us to be weaker. This is appealing in physics because it means that the same framework could unite gravity and the electroweak force."

"Black holes really represent the epitome of physics. They are very simple systems that result in all sorts of rich and deep mathematical structures and an unending chain of complications." – Amitai Bin-Nun

Bin-Nun's calculations found that when S2's secondary image reaches peak brightness—sometime in early 2018—it will be about 44 percent brighter if the Randall-Sundrum model, rather than the four-dimensional view of the universe, is true. "If there are extra dimensions," he explains, "then you expect gravity to be stronger, including around black holes. As a result, the black hole should be able to focus more of the star's light onto us."

Bin-Nun adds one caveat—it is currently very difficult to test his calculations. One reason is that today's ground-based telescopes cannot achieve the resolution needed to distinguish among the many light-emitting objects near the center of the Milky Way. Additionally, he had to make several assumptions about the form of a five-dimensional black hole, since the shape of the space around it is not known, and he did not account for the possibility that the black hole could be spinning.

While the existence—or lack thereof—of extra dimensions will remain a mystery for some time more, Bin-Nun's study has shown that gravitational lensing can be used to study how gravity behaves near a black hole. Right now there is almost no way to directly examine gravitation around an object, but this could change with the arrival of more powerful telescopes—a development that Bin-Nun predicts is only a decade or so away.

"I'm hoping this analysis of lensing can be used, in some form, as a test for theories of gravity," he says. "I also hope it can be used to probe what exactly is going on in the center of our galaxy. Is it definitely a black hole? If so, what do black holes look like? Is it spinning? Is there some other material there? This tool has the potential to offer insights into these and other questions."