OMNIA Q&A: Food and Farming During the COVID-19 Crisis

Hannah Kass, who is pursuing a Master of Environmental Studies, examines the U.S. food supply and the challenges farmers are facing. 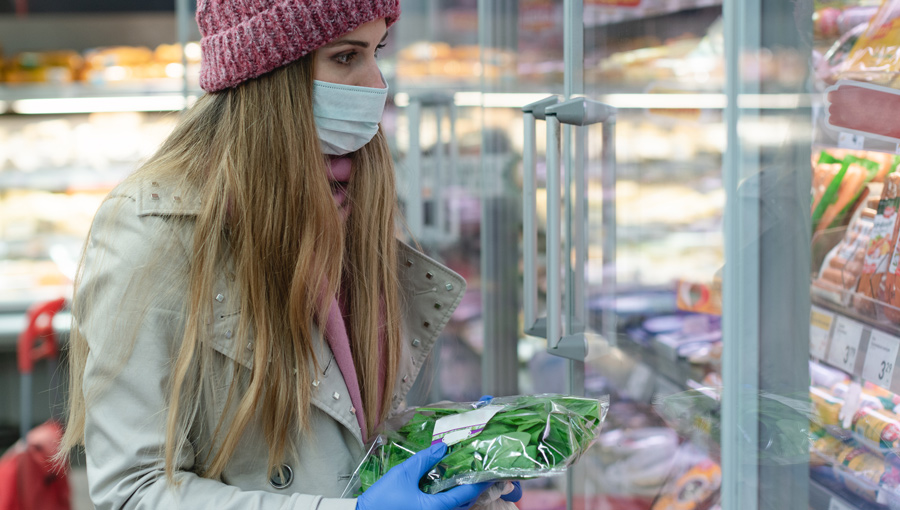 Shortages at grocery stores following the arrival of COVID-19 in the U.S. have raised concerns about food availability, and farmers and grocery store staff have been designated as essential workers during the national emergency.

Hannah Kass is a Master of Environmental Studies student in the College of Liberal and Professional Studies. She researches food sovereignty, agroecology, political economy, and food regimes, and has conducted ethnographic fieldwork with organic farmers. She recently published the op-ed “Breaking Up Big Ag Requires Reasonable Antitrust Enforcement” in The Regulatory Review, and a book review in the journal Agriculture and Human Values. We spoke to Kass about the food supply chain during this crisis.

Q: Will we have enough food during the COVID-19 crisis?

There is no doubt that we are able to provide food during this crisis—don't let the panic buying fool you into thinking the supply is low. It is a myth that there is not enough food to feed the world. In fact, food has been overproduced and prices are now too low for many farmers to adequately sustain themselves. Farmers and farm workers are the largest group of hungry people, particularly in the global South, but increasingly in the global North as a result of this crisis.

The question is whether or not our political leaders are willing to ensure that food is equitably distributed. This is certainly a complicated task. In the U.S., the people most likely to go hungry during this crisis are, of course, the 40 million who were already hungry, but also the many people who rely on restaurants, fast food, and corner stores to eat. If they live in places that have enacted shelter-in-place and all of their nearby food options are closed, how are they going to get food?

There is also the issue of supply becoming unable to keep up with demand because the long supply chains of distributors, processors, and retailers are vulnerable to issues along the way.

Then there are the people being let go from their jobs. There are the millions of children who relied on getting meals at school, but now schools are closed. How are these people going to get food? So, there is likely to be deepened hunger and food insecurity as a result of the COVID-19 crisis.

Q: What can be done to ensure people have access to food?

I believe that some of the supply should be channeled into reserves and food banks and that delivery services need to be federally funded. In some places, the U.S. military is being used for disaster relief efforts, and that should include food delivery to the quarantined, with a focus on food-insecure neighborhoods. This is particularly important for grocery store workers, who are having trouble feeding their families as a result of store patrons stockpiling goods. There's nothing left for those workers to take home to their families, yet they are on the front lines of the pandemic.

Structural issues causing food insecurity that were present before the current crisis will need to be addressed. These include poverty, stagnant wages, a tattered social safety net, food deserts [areas where fresh food is unavailable or unaffordable], and the privatization and commodification of seeds and food. Now, in light of the current crisis, there will need to be a huge infusion of federal funds into the hands of the working class and into food assistance and distribution efforts.

It depends on which farmers you're talking to. Local farmers—who are not typically contracted with agribusiness (the large-scale, industrialized production of food)—are currently facing a mass closure of farmers' markets, which for many will mean a huge hit to their income. There is an effort to keep farmers' markets open around the country with precautions in place. It depends on whether or not a shelter-in-place policy is enacted, but also on whether farmers and market staff are deemed "essential workers."

The farmers' market is not just a fun summer activity for the elite. It is an essential source of income for farmers and farm workers, and a place where people can buy food. Many jurisdictions are doing the right thing by classifying farmers' markets as an essential service alongside grocery stores and food banks.

Many local farmers also make a portion of their income selling wholesale to restaurants, which are taking a huge hit. It appears that the lifelines for local farmers will be in farmers' markets, if they stay open; selling wholesale to grocery stores; and CSA (Community Supported Agriculture) shares, where consumers can buy a share of the harvest ahead of time and receive a box of produce each week. The latter, however, will likely only survive if farmers are able to home-deliver CSA shares to the quarantined public, or if CSA pick-ups are held in a public location with little chance of contagion.

The farmers who are contracted with agribusiness and are growing crops for export have been receiving an unfair price for their product for decades, and have dealt with price-fixing and debt incurred because of the demands of their contracts. They are particularly dependent on world food prices. World trade and commerce is continuing on despite border closures, at least for now. Contracted farmers may be helped by subsidized crop insurance.

Before the crisis, food production was expected to reach near-record highs this year. Now that prices have been plummeting, farmers are frantically trying to adapt. Dairy farmers are dumping milk, like they did during the Great Depression, in an attempt to pull prices up.

Q: What effect are measures like the border closing having? How can we balance quarantine issues with food production?

A large portion of the food system's labor force comes from immigrant labor. It will be impossible for anyone to immigrate here legally during this time, but undocumented immigrant labor is likely still coming in. Unfortunately, these laborers are much more vulnerable to exploitation, as they will not be given any protections of any kind. They are more likely to be sick, hungry, food-insecure, and forced to work anyway. Immigrant labor working in the restaurant industry has been, and will be, most vulnerable due to mass closings and layoffs.

If the border closes to trade, then we can expect to see imported goods running out quickly. Now is the time for the nation—all nations, really—to invest in domestic food production and distribution, and prioritize food sovereignty.

Q: What do you think will change—or should change—as a result of this crisis?

Unless we quickly enact progressive social policies that ensure that people are able to access healthcare and food, we can expect to see many, many deaths from sickness and hunger in the wake of the COVID-19 pandemic. This crisis is demonstrating the true value the working class provides for the economy and for society. Without the labor force, the entire economy collapses.

Other changes that should be made in order to keep farmers afloat and people fed: The U.S. federal government needs to invoke the policies included in Agricultural Adjustment Act of 1933—the very first Farm Bill, which saved our farmers from poverty and people from going hungry in the wake of the Great Depression. We need to be thinking in the same ways we did then, because from an economic point of view, history is repeating itself. In particular, a price support that ensures food prices cannot plummet below the costs of production will be vital to ensure that farmers receive a fair price for their product.

That bill also addressed supply management by enacting federal grain reserves. This would ensure that the population does not go hungry and help stabilize world food prices. The country should also consider shifting its subsidies over to small, local farms and farmers. Right now, most of the subsidies go toward industrialized agriculture, and are mostly oriented towards funding exports rather than feeding people in the U.S.

COVID-19 was born from an under-regulated animal product, as were several other infectious diseases. More sustainable livestock farming, as well as shorter supply chains and vigilant food safety regulatory measures, will need to be a big part of the conversation for preventing infectious diseases in the future.

Q: With the campus closed and classes going online, how are you doing during the crisis?

I've just had my first week of Zoom classes. It's a little strange, but I have to say that I am very grateful to be able to continue my education and connect with my colleagues, even over video chat. It's good to see everyone's faces, and to focus my attention away from the news and more towards my studies. Physically, I am thankfully healthy and not symptomatic in any way. As far as what I do with my time, my "quaroutine" has consisted of waking up, saying my prayers over coffee, pulling a tarot card, and chipping away at the final month of my Master's degree. For exercise in the evening, I'll usually do a yoga video, take a walk, or lift the weights I've made by putting a bunch of heavy books in backpacks. I've also invested in some art supplies and healing crystals. It's been hard to get used to, but I'm adjusting to the new normal.