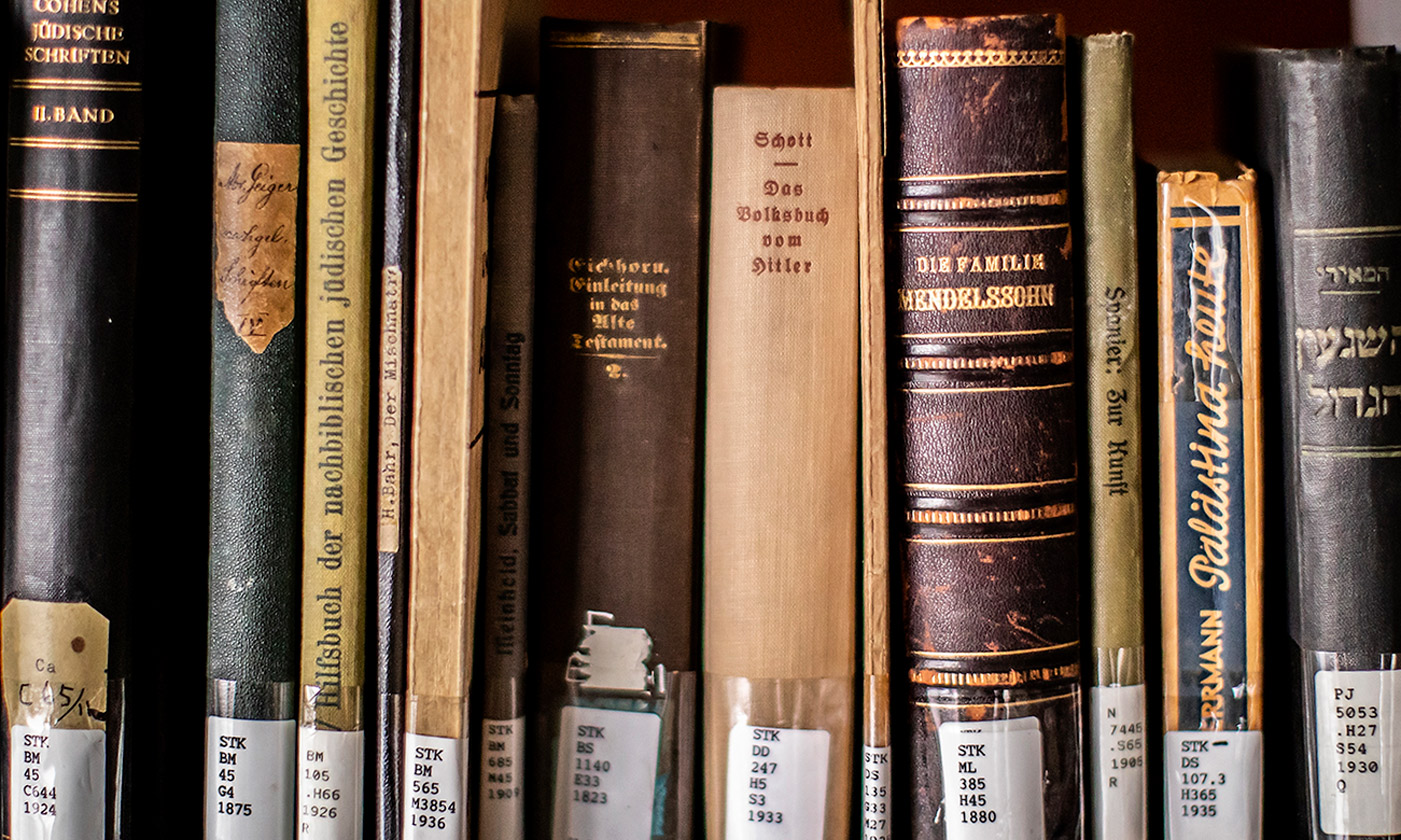 Hundreds of books looted by the Nazis during World War II provide a window into history and individuals we may otherwise have never known.

Hidden in the stacks at the Herbert D. Katz Center for Advanced Judaic Studies sit hundreds of books once looted by the Nazis, then sent to the U.S. after World War II. Though it’s unclear exactly how many the University has—accounts range from 1,000 to more than 5,000—what’s pointedly clear is how much we can learn from these tattered, beautiful tomes. And not just about the volumes themselves, but about their former owners, where those people lived, what they experienced.

The books, perhaps the only physical remains of a town or a family, have traveled thousands of miles to end up in Philadelphia. “They are these material remnants of a robust and meaningful life that was destroyed,” says Kathy Peiss, Roy F. and Jeannette P. Nichols Professor of History. “It’s wonderful that they were preserved, but what they represent is this lost world, lost lives, and the displacement of a culture.”

Such artifacts have been part of Peiss’ world for a dozen years. More recently, archivist Bruce Nielsen has been trying to locate as many of the books as possible within Penn’s collection, and in the process, he’s attempting to honor the book owners themselves.

“It’s common or easy to talk about Holocaust victims who have no names. We don’t have a story about them; they’re just this number,” says Nielsen, the Judaic public services librarian and archivist at the Katz Center library. “But here we actually have real names. We have stamps. And for many of them, we also have stories.”

The Journey to Penn

During World War II, the Nazis stole millions of books at the behest of Hitler advisor Alfred Rosenberg. When Allied Forces arrived in Germany in 1945, American soldiers discovered some 2.5 million volumes scattered around a town called Hungen. The army’s Monuments, Fine Arts, and Archives unit—popularly called the Monuments Men—then unearthed large collections in Frankfurt and elsewhere across Germany, eventually bringing them to a warehouse called the Offenbach Archival Depot.

Those that could be returned were, but that still left half a million orphaned books.

“The question of what would happen to the books became a big political controversy,” Peiss explains. “Not all were Judaica or owned by Jews, but the vast majority were. A number of Jewish organizations in the U.S., Great Britain, and what was then Palestine were trying to get the U.S. government to release these books to a Jewish organization. Eventually they were given to a group called the Jewish Cultural Reconstruction.”

By now it was 1949. After sorting and storage at Offenbach, about 40 percent—approximately 160,000 books—came to the U.S., 40 percent went to newly formed Israel, and beyond a small number that remained in Germany, the rest landed in Africa and Latin America. The books housed today at the Katz Center library originally went to a Philadelphia institute called the Dropsie College of Hebrew and Cognate Learning. The Dropsie College merged with Penn in 1993 and today is the Katz Center for Advanced Judaic Studies.

“The books came to Dropsie around 1951,” Nielsen says. “When they actually arrived and what was done when they immediately arrived, I have no record. The only records we have are the work that I’ve done collecting titles and call numbers.”

Needles in a Haystack

Nielsen keeps his list of titles and call numbers in a spreadsheet he physically carries through the shelves. He’s one of just four people who cares for the Katz Center collection, so the lack of solid records severely impedes much forward progress. Despite that, Nielsen’s located nearly 900 books.

“I go looking up and down the stacks,” he says. “If we see certain stamps or bookplates, we know it’s a book that had been looted.”

One imprint signifies that an item traveled through Offenbach. Other marks are more chilling, like an eagle gripping a swastika. Nielsen also looks for a Jewish Cultural Reconstruction (JCR) bookplate.

“If you look in our electronic catalogue, there are only about 150 entries for JCR books,” Peiss says. “Bruce has found many, many more. They weren’t catalogued well, and in some cases, they didn’t have the bookplates they were supposed to have.” Beyond that, a November 1981 arson fire at Dropsie, coupled with duplicates getting thrown away, may have depleted parts of the collection.

Though seeking out these books has been akin to finding a needle in a haystack, for Nielsen, each has the potential to unearth a treasure trove about the people who studied from and owned these texts.

That’s what moves Nielsen the most, and it’s easy to understand why. JCR handled tens of thousands of books after World War II, creating a list of names and number of books processed per person. Nielsen had used this as his guide, seeking out titles that also displayed the Offenbach stamp. It was a logical first step—until he realized he’d encountered mostly books in German. The few in Hebrew had stamps from individual rabbis, and no mention of the depot.

“I kept thinking, where did all the Hebrew books go?” he explains. “I thought maybe the people at Offenbach couldn’t read Hebrew and so they gave the books to the rabbis. Boy, was I wrong.”

Changing his tack, Nielsen started locating hundreds more books, nearly all in Hebrew and Yiddish and many from a single Lithuanian town. “I kept coming up with the same rabbi’s name,” he says. “I went to the Offenbach lists and there he was. This guy was a big shot in Lithuania, and the list said they’d processed 162 books. I can identify 108 of them. It’s unbelievable that we could’ve ended up with almost 70 percent of one person’s library.”

The man’s name was Mordehai ben Rabbi Josef Kerimer. His Lithuanian town still exists, and thanks to survivor accounts, Nielsen knows what happened to him.

Early in the war, the Nazis took over Kerimer’s town and forced the Jews there to dig a long trench in front of a building called the Ninth Fort. In one of the Nazis’ so-called “Great Actions,” nearly 10,000 were marched to the fort and killed, their bodies falling into the trench.

“He was among them,” Nielsen says. “We know exactly when he died.”

The Future of the Books

To ensure that accounts like this one are preserved, Peiss and Nielsen are considering options such as a virtual catalogue. “When these books came to the U.S. and went to different institutions, for the most part, they were folded into general collections,” Peiss says. “At a minimum, having a way to identify them as a collection of looted books that has historical meaning would be an important step for Penn to take.”

I want to find a way of honoring their memories. I just feel like when I have a name or names, I want to do what I can to lift those names up.

She also mentions there’s currently a worldwide movement to restitute books, particularly those from eastern Europe, which were handled less carefully than those from western Europe. “It’s really important to try to do right by the people whose lives were uprooted and whose collections were taken in this way,” Peiss says.

Without question, Nielsen feels the same. He gets visibly upset talking about the books and though he doesn’t say so, it’s clear he feels uncertainty, even helplessness, at trying to figure how best to memorialize these individuals. “I just feel like when I have a name or names, I want to do what I can to lift those names up,” he says.

Books are meant to tell stories. Yet these items offer more, a glimpse into a different time in history and into the lives of people who we may have otherwise never known.