A Crisis of Malnutrition

Undergraduate Lavanya Madhusudan explores the connection between malnutrition and women’s welfare in India. 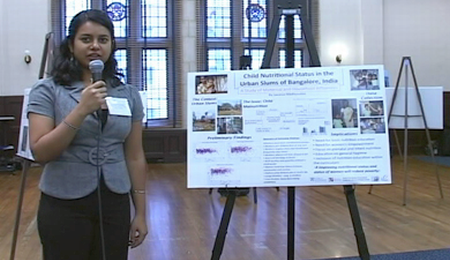 In a class on health policy in South Asia, Health and Societies major Lavanya Madhusudan, C’09, was singularly affected by a documentary about the malnutrition of females in India. The film described the plight of girls from a village near the city of Bangalore, where Madhusudan was born.

“I just kept thinking, ‘What separates me from those girls?’” Madhusudan says. “It just so happened I was fortunate enough to be born in a family that did not have economic problems like they did, and the film hit really close to home.”

This experience motivated Madhusudan to write her senior thesis on possible connections between maternal welfare, household factors and children’s nutritional status among poor communities in India. With the help of grants from the Department of South Asia Studies, as well as Penn’s Center for the Advanced Study of India and the Center for Undergraduate Research and Fellowships, she spent several weeks in Bangalore last summer conducting extensive field studies on the subject.

“I wanted to learn about the nutritional status and welfare of children and mothers living in urban slums,” Madhusudan says. “That’s where rural migrants to the city generally settle, and those populations show the highest levels of malnutrition.”

Madhusudan gained access to subjects by working with the Parikrma Humanity Foundation, a non-profit agency which operates four free schools in Bangalore to educate children from the city’s slums. Her first step was to measure the height, weight and body fat of the 983 children enrolled in Parikrma’s schools. She analyzed these data using free software provided by the Center for Disease Control and Prevention to categorize the children as properly nourished or malnourished. Madhusudan then conducted 90-minute qualitative interviews with a number of mothers of children from each group.

"I hope my work encourages people to tie together women's empowerment and nutrition, because there aren't many programs right now that deal with the combination of those two issues." - Lavanya Madhusudan

Most of the interviews were in the local language Kannada, in which Madhusudan is fluent, and included topics such as household structure and size, reason for migration to the city, the mother’s childhood experiences and marital relations. Madhusudan also asked mothers about their views on food and nourishment, their health-seeking behaviors, as well as how they perceived their own mental and physical health.

“All of these families come from similar economic backgrounds,” Madhusudan says. “So my goal is to see if there are any differences and patterns specific to the way mothers approach nutrition and childcare that make a difference in whether a child is properly nourished or malnourished.”

Madhusudan is still in the process of analyzing her data, but she has identified overarching trends that apply to the majority of mothers she spoke to. She found that they lacked knowledge about good nutrition, and that personal, societal and family pressures often resulted in their foregoing everything from meals to health care in order to provide more of those necessities for their husbands and children. Madhusudan also found a high prevalence of alcoholism among adult males in the households.

These findings, Madhusudan hopes, will be a first step to countering the lack of qualitative information on the level of the household, especially from women, about the health of people who live in the urban slums of India.

“In India, most of the data that currently exists on malnutrition is on an aggregate and usually national level,” she explains. “That only gets you part way to figuring out what’s causing this problem in these communities. I hope to circulate my findings, and to inspire people in higher positions to pursue qualitative, culturally oriented research on this subject. I also hope my work encourages people to tie together women’s empowerment and nutrition, because there aren’t many programs right now that deal with the combination of those two issues.”

Madhusudan’s research has inspired her to begin developing her own project to combat malnutrition among women and children in India. As part of a class on the politics of women’s health care, offered by Penn’s School of Nursing, she’s developing a training module, to be used by social workers at Parikrma, which will train mothers to talk to their daughters about reproductive health and prenatal nutrition.

“There’s a taboo in these communities surrounding discussing these issues with girls,” Madhusudan says. “My idea is to create a way to go through mothers to impart this information in a way that’s effective and socially acceptable.”