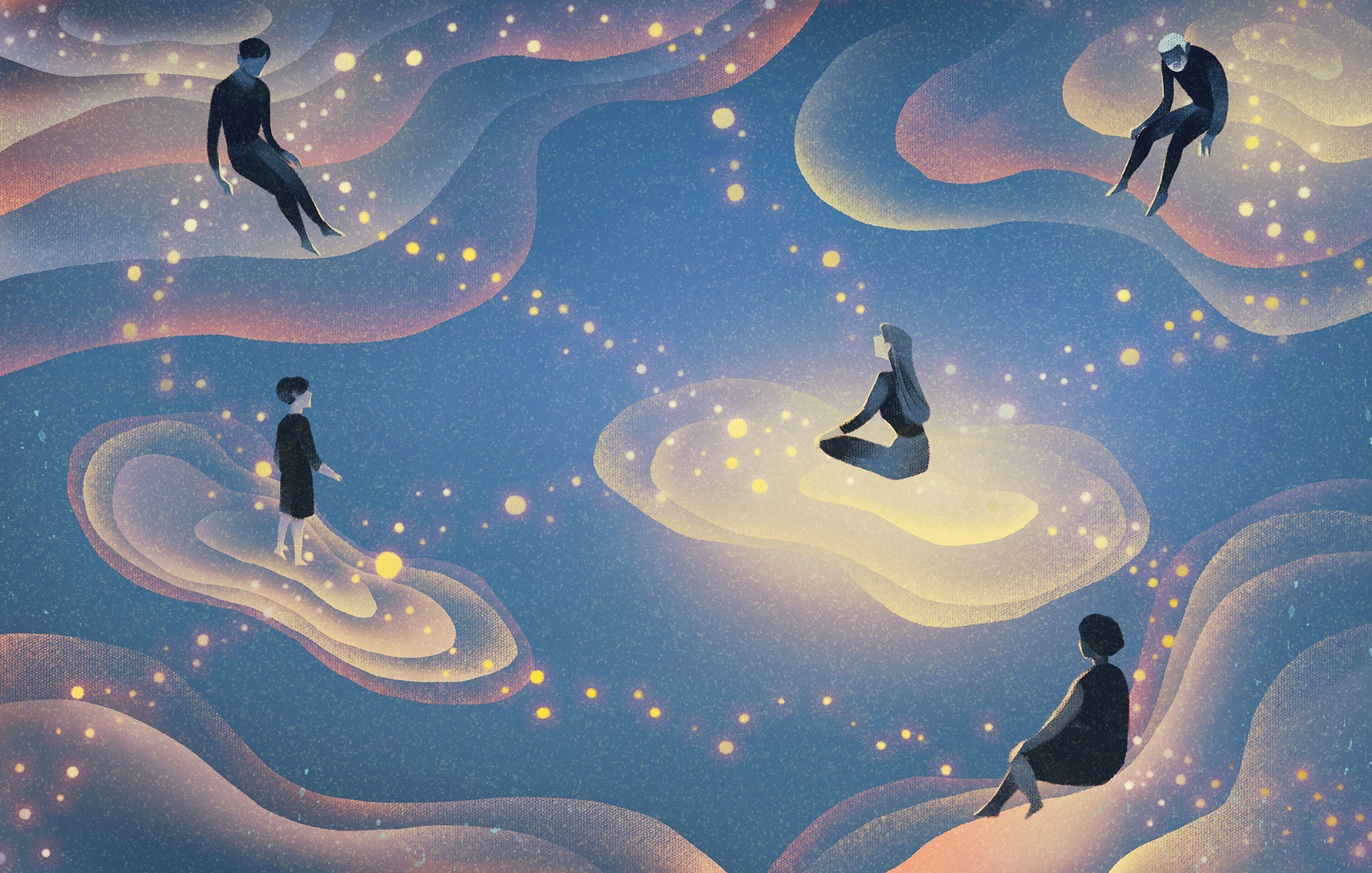 After Hurricane Maria ravaged their habitat in September 2017, the rhesus macaques living on Cayo Santiago, a tiny island off the southeastern coast of Puerto Rico, coped in a striking way: by making new friends.

“Every monkey became much more intensely social, especially those who had been loners before,” says Michael Platt, GR’94, James S. Riepe University Professor, who began studying social interactions within that population in 1994 and continues to do so today. “They became more tolerant of each other and reached out across groups, with higher-ranking monkeys interacting with lower-ranking monkeys and so on. We’re analyzing our data now, and it is very compelling in showing that monkeys with more connections were more likely to survive.”

Our work is highly varied, but at its core, it’s looking at why we do the things we do.

Since their biology virtually matches that of humans, rhesus macaques can reveal important insights for understanding human nature—which happens to be Platt’s primary research goal. A Penn Integrates Knowledge Professor with appointments in three schools—the Department of Psychology in Penn Arts & Sciences, the Department of Neuroscience in the Perelman School of Medicine, and the Marketing Department in the Wharton School—Platt aims to gauge how the brain makes decisions, particularly in social situations.

“Our work is highly varied, but at its core, it’s looking at why we do the things we do,” he says. “Why do we make the decisions we make? How do those processes relate to the problems we face in business and in society at large? If we can understand that, we can develop interventions to help people who have challenges in decision-making or social interaction.”

Raised by a mechanic and a school bus driver in a blue-collar Ohio town dominated by the steel and automotive industries, Platt felt an innate pull toward biology and as a child kept a collection of Time-Life books on evolution under his bed to read each night. The first in his family to graduate from college, he scored a football scholarship to Yale, but one too many concussions halted his athletic career. His newfound free time enabled him to explore a range of subjects, and he ultimately majored in anthropology because it offered “the broadest lens through which to study human nature since it’s biological, cultural, historical, linguistic, and archaeological.”

A summer research program involving stumptail macaques in Mexico framed his personal and professional future; during that trip he met his now-wife, Elizabeth Brannon, C’92, Edmund J. and Louise W. Kahn Term Chair in the Natural Sciences and Professor of Psychology. Both Brannon and his field experience led him to Penn, where he pursued a Ph.D. in biological anthropology with renowned primatologists Dorothy Cheney and Robert Seyfarth.

“I have no bona fide credentials in any of the three fields in which I play,” Platt notes—although he did complete a postdoctoral fellowship in neuroscience at New York University with Paul Glimcher, GR’89, with whom he co-authored a Nature paper that is now regarded as one of the foundational articles in neuroeconomics, the interdisciplinary study of decision-making.

Platt taught and did research in psychology and neuroscience at Duke University for 15 years before joining Penn’s faculty. He says Penn has given him the freedom to do what he was previously doing, “but on steroids.” Much of his work has focused on the “social brain network”—a two-pronged circuit in the brain that governs empathy and relationships and functions identically in monkeys and humans. In a paper published in Science Advances in April, he and his colleagues showed for the first time that the more friends a rhesus macaque has, the bigger these specific areas of their brain are.

“This network determines how we interact with others—do we cooperate with them? Help them when they need it? Cheat them?” he says. “Our findings suggest a strong correlation between the structure and function of this network and one’s success in navigating the social world.”

Given these results, he expects his team’s post-hurricane data to confirm that monkeys with the largest social brain networks had the greatest chance of enduring the storm’s aftermath—and he suspects this also means people with larger social brain networks tend to live longer, more prosperous lives.

On the human side, Platt measures biomarkers of brain activity as people make decisions and engage in various interactions. Mimicking complex social situations in a laboratory setting isn’t easy, and he is currently striving to accrue more “real-world” neuroscientific data, which renders standard technologies like magnetic resonance imaging and electro-encephalograms impractical.

Having already found a way to capture monkeys’ brain activity wirelessly with implanted devices, Platt has turned to wearable monitors for humans. Disappointed with existing options that proved cumbersome or provided inaccurate data, he co-founded Cogwear Technologies, a startup company that has designed a comfortable, unobtrusive headband with sensors that gives high-quality cognitive feedback—“like a Fitbit for the brain.”

“We are really advancing the technology for studying real-life interactions, unconstrained. These advances allow us to refine our understanding of what’s going on fundamentally in the brain,” he says. “This peek under the hood is important, because without it, we are left looking at people’s observable behavior and asking them questions. But observable behavior can be the product of many invisible forces going on inside your brain and body.”

Applications for monitors like Cogwear’s are endless, says Platt, who hopes that when the device reaches the market, it will initially be used to assess mental health conditions like depression and anxiety. His team’s testing has indicated that their sensors can identify anxiety disorders significantly more accurately than commonly used wrist-based wearables—and they may be able to evaluate the efficacy of therapies and pharmacological treatments, which affect people’s brains before their behavior begins to change.

The device will also complement Platt’s work in other areas, such as using brain activity data to optimize athletic performance and improve teamwork among peers and colleagues. Platt Labs researcher and psychology major Lana Prieur, C’22, is especially invested in these studies. The varsity foil fencer and aspiring physician has been exploring how group interactions, both in person and online, might influence her success on the fencing strip and maximize her impact as a clinician in the future.

“Joining Dr. Platt’s lab back as a freshman changed my whole trajectory. It’s a welcoming, comfortable place where there are no stupid questions. He showed me that I always want to include research in my life, no matter what else I am doing, because there are so many compelling questions out there—and he helped me discover my drive to answer those questions,” says Prieur, a Rhodes Scholarship nominee and Fulbright Scholarship semifinalist who is currently preparing her first article for publication. “I would not have had the confidence to apply for any of these things without Dr. Platt’s support and encouragement.”

Platt believes his working-class upbringing and the “imposter syndrome” he felt when he entered academia primed him to mentor young researchers from varying backgrounds and disciplines. The more people who are working to understand human nature, the better, he says, as long as they all share a common curiosity.

“Human beings are social creatures. We are wired that way. People who have conditions that make it difficult for them to form bonds face debilitating limitations,” says Platt. “Neuroscience can help us get around some of those challenges so we can be happier and healthier, have better relationships, and do better business.”