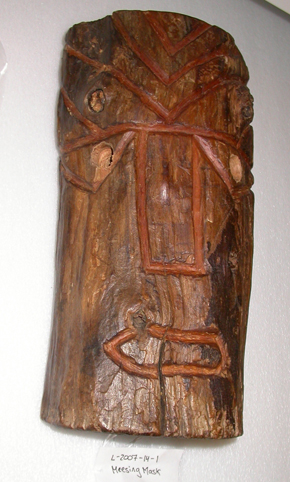 Anthropology junior Abby Seldin never dreamed that the independent project she began during her sophomore year would end up defining her Penn experience. As part of a National Science Foundation Research Experience for Undergraduates program operated by the Penn Museum, Seldin decided to curate a small exhibit about the Lenape Indians drawing from the museum’s Native American collections. Although the Lenape are indigenous to the region, none of the books Seldin read during her initial research mentioned that there was still a Lenape community in Pennsylvania. So when her advisor, Associate Professor of Anthropology Robert Preucel, introduced her to members of the Lenape Nation of Pennsylvania, Seldin found the inspiration to take her work to a whole new level.

“Meeting these people and hearing their story, which is a magnificent story of cultural survival in the face of unconquerable odds, really made me want to redirect the project to being about the Lenape in Pennsylvania in particular,” Seldin says. “I felt it would also have particular resonance for the exhibit’s audience, most of whom will be local. Many people don’t understand that there are still people in this state who culturally identify themselves as Native American.”

During the past two years, Seldin, a University Scholar, has developed her project into a ground breaking exhibit called “Fulfilling a Prophecy: The Past and Present of the Lenape in Pennsylvania,” which will open at the Penn Museum on September 13, 2008. She invited Robert Red Hawk Ruth, chief of the Lenape Nation, and tribal secretary Shelley DePaul to co-curate, making “Fulfilling a Prophecy” one of the first exhibits in the United States to be co-curated by an anthropologist and Native American representatives.

“This exhibit is at the cutting edge of museum practices in anthropology because it treats Native Americans as equals as opposed to just subjects of study,” Seldin says. “And it would have been impossible to tell their story fully without making sure they had ownership over the project.”

Seldin’s research revealed that this story has been largely ignored by published texts and the state itself, which does not officially recognize the local Lenape community. In the 18th and 19th centuries, most of the Lenape in Pennsylvania were forcibly removed and pushed further and further west until their final placement on reservations, primarily in Oklahoma or Canada. “Most history books say there were no Lenape left in Pennsylvania after 1803,” Seldin says, “but there were actually Lenape who intermarried with European settlers in the 1700s who remained. They went underground and appeared to assimilate, but they actually maintained their language and their cultural and religious practices.”

For the past 200 years, successive generations of Lenape have been maintaining these practices in secret. However, Seldin explains that in the past two decades, there has been a movement among members of the community to make their existence public. It has been motivated in part by the strong Lenape commitment to the environment and their desire to promote better care of the land.

“Fulfilling a Prophecy,” which will occupy an entire gallery in the Penn Museum, tells this story through artifacts from the University’s collection and through objects borrowed from Lenape Nation members that have been passed down through multiple generations. Seldin says some of the most interesting items reveal how the Lenape “hid in plain sight.” An apron, for example, is embroidered with a traditional “turkey track” pattern, which the non-initiated would just view as a pretty design but which held great symbolism to the Lenape. Also on display will be a quilt with one square missing – seemingly a simple mistake. But to the Lenape, who embed an ‘error’ in all their art, it is a purposeful sign of spiritual humility.

Other projects associated with the exhibit include a short film being made in partnership with Penn’s Graduate School of Education and a book, to be published by the University Museum Press, that Seldin will write with her co-curators.  She hopes that for the Lenape the exhibit “will be a wonderful way to have a public introduction and be recognized by a major institution.” The project also furthers Seldin’s longstanding interest in “exploring how museums can be venues for civic discourse.”

“This project is about service and it’s about working with local communities,” Seldin says. “It has really been my dream to see a museum act in a way that it educates its constituency and empowers a group of people.”