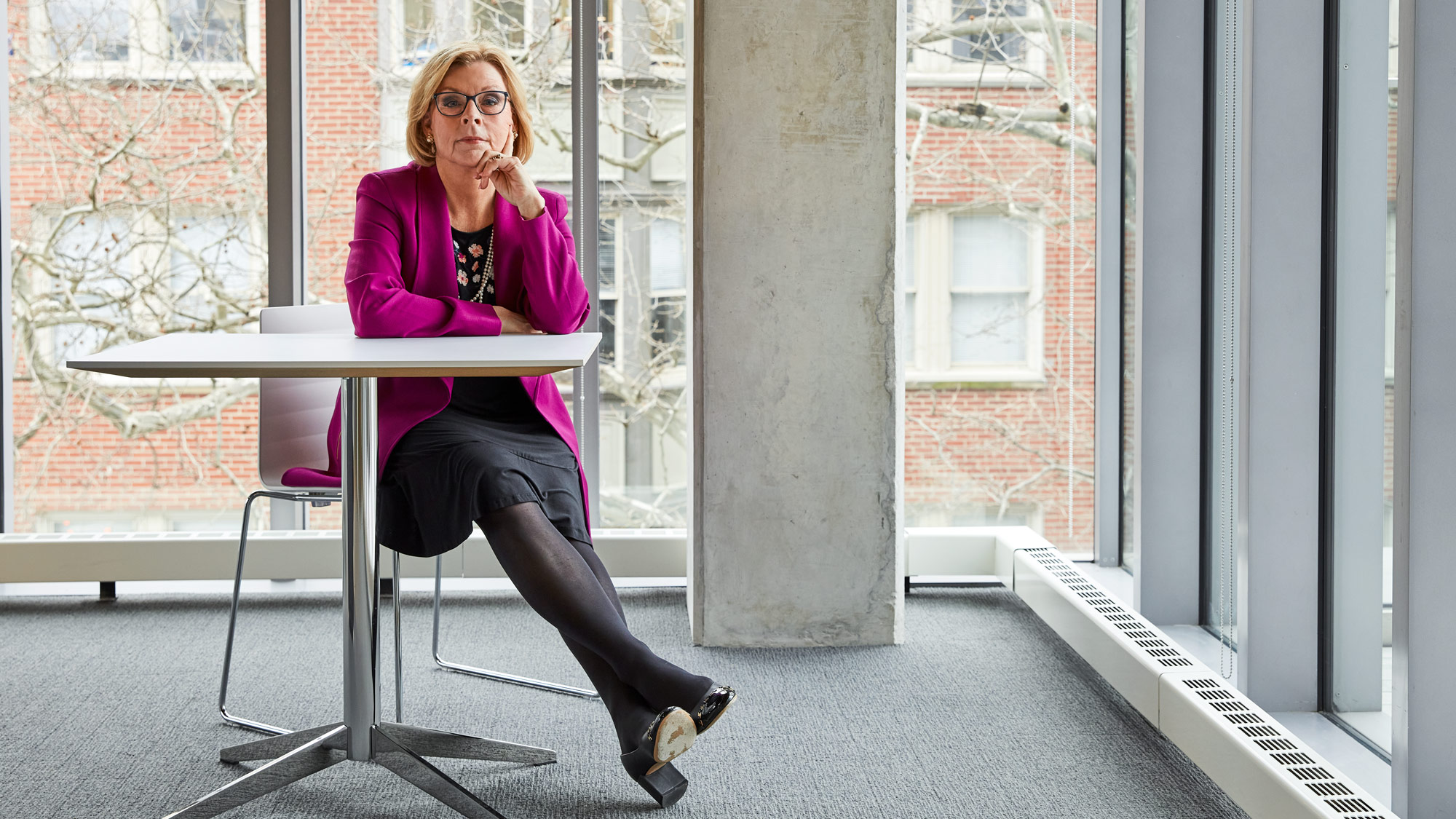 OMNIA Q&A: Changing the Narrative on Religion and Abortion Rights

Marci Hamilton, Professor of Practice in Political Science and Fox Family Pavilion Senior Fellow in the Program for Research on Religion, is working on behalf of religious leaders who argue that strict anti-abortion measures are violating their First Amendment rights.

Seven members of Florida’s clergy are suing over the state’s 15-week abortion ban, arguing that the law violates their First Amendment rights to freedom of speech, religious liberty, and the separation of church and state under the Establishment Clause, which prohibits the government from favoring one religion over another. They’re also arguing that the ban violates Florida’s Religious Freedom Restoration Act. Marci Hamilton is the lead constitutional law attorney representing the clerics.

Hamilton, Professor of Practice in Political Science and Fox Family Pavilion Senior Fellow in the Program for Research on Religion, is a career-long critic of extreme religious liberty. As a law professor, she successfully challenged the constitutionality of the Religious Freedom Restoration Act (RFRA)—a federal law passed in 1993 that prohibited any governmental agency, department, or official from substantially burdening a person’s exercise of religion—at the Supreme Court in Boerne v. Flores (1997). As a scholar, she has authored the Pulitzer Prize nominee God vs. the Gavel: The Perils of Extreme Religious Liberty, which dissects how extreme religious liberty laws lead some religious groups and institutions to exploit religious freedom arguments to permit harm to others, including in cases involving clergy sex abuse, healthcare, LGBTQ rights, and discrimination in housing and land use. Hamilton is also the founder and CEO of CHILD USA, a nonprofit think tank dedicated to using interdisciplinary, evidence-based research to prevent child abuse, exploitation, and neglect, which she started when she joined Penn’s faculty in 2016.

When the Supreme Court draft opinion overruling Roe v. Wade leaked in May, Hamilton sounded the alarm about an increasingly successful movement to construct government based on a minority’s conservative religious beliefs. Here, she explains how the Florida clerics and others are inserting their faiths into the public debate over anti-abortion laws.

A number of religious leaders in Florida have filed lawsuits challenging the state’s new, post-Roe abortion law, House Bill (H.B.) 5. Can you describe their arguments?

H.B. 5 bans abortions after week 15 with two very small exceptions: if the life of the mother is imminently at risk, or if the fetal abnormality is fatal to the fetus. There’s no exception for incest, rape, or trafficking, and there’s no religious accommodation. The operation of the law makes performing an abortion after 15 weeks a crime. Under ordinary criminal law, including in Florida, you are aiding and abetting a crime if you advise someone to get an abortion beyond H.B. 5’s boundaries.

We have put together a spectrum of religious beliefs—Buddhism, Christianity, Episcopal, Judaism, and Unitarian Universalism—and for each religion, we are arguing that under an ordinary reading of the law of Florida, the clergy are now being told that they cannot advise the members of their congregations about abortion in accordance with their religious beliefs in all the circumstances beyond H.B. 5.

The law is extremely restrictive, and each of the faiths that we represent believes that individuals should be able to make their own choices in consultation with their faith or that the law of their religion requires abortions in some circumstances. For example, they may condone an abortion at week 23 in the appropriate circumstances under their faiths. The Florida law is really a tourniquet on their ability to speak and to act on their faith.

Despite a state judge ruling that the 15-week ban violated the privacy clause in the Florida Constitution, H.B. 5 has gone into effect. How does this right to privacy clause inform the legal strategy in the clergy’s lawsuits?

That’s a really good question. And the answer is that we are not bringing privacy clause claims. We are arguing that this is a violation of the clergy’s fundamental right to religious belief and  speech; it is a violation of their rights to the free exercise of religion, and a violation of the separation of Church and State. These three constitutional arguments are being made, so it’s possible we could get up to the United States Supreme Court.

We’re also arguing that the Florida Religious Freedom Restoration Act requires the state to accommodate these believers, and H.B. 5 does nothing to accommodate them, or any other clergy members or believers whose religious beliefs support abortions beyond the narrow confines of H.B. 5.

The Florida RFRA law was patterned directly on the federal RFRA. After we won the lawsuit against RFRA in 1997, attention switched to passing RFRAs in every state. Florida was one of the very first states to basically take the federal RFRA and adopt that language for state law.

The RFRAs have a formula, and the formula is that the believer has to allege that their free exercise of religion, which can include religious-based speech or conduct, has been substantially burdened. Once the believer does that, then the burden shifts over to the government. The government has to prove that its law was passed for a compelling interest; and secondly, that the law is tailored in the least restrictive means for this believer. That means that in the states with RFRAs, which is roughly half of the country, there is in place a law that may require accommodation of every law in the state for any believer. H.B. 5 isn’t tailored to anyone other than evangelical Christians and conservative Catholics, which leaves out the vast majority of faiths, including the five we represent.

You’ve been a critic of federal and state RFRA laws in the past. How did you come to represent the plaintiffs in the Florida lawsuits?

I’ve been sitting at the table from the beginning of the RFRA era. This debate over religious liberty began in 1990 with Employment Division v. Smith at the United States Supreme Court. I was clerking for Justice Sandra Day O’Connor that year, and in 1993, the federal RFRA was passed. Then in 1997, I took that RFRA to the Supreme Court, and succeeded in arguing it was unconstitutional.

Religious groups went back to Congress and asked for reenactment of RFRA. I testified multiple times that RFRA is not restoring anything you ever knew—it’s dangerous, and I accurately predicted in my testimony and columns at the time that Title VII [which prohibits employment discrimination based on race, color, national origin, sex, or religion] would be cut back by the RFRA. Members of Congress blinked or intended that result and the federal RFRA was re-enacted along land use and prisoner rights. Justice Gorsuch wrote the Bostock opinion recently in which he said that Title VII extends to sexual orientation as well as gender identity, but in that case, he also wrote two paragraphs in which he suggested that employers that are religious can use RFRA to justify discrimination.

I’ve been deeply involved in all these issues, and I’ve been very public against RFRAs, so  everybody is asking me why I would now represent people under RFRA. And the answer is because the baseline has changed. There was no emerging theocracy before. I wrote a “Verdict” column in Justia right after the Dobbs v. Jackson Women’s Health decision explaining that the American public does not understand that this is a religious movement we’re dealing with. It’s not a culture war—it’s a religious war. We are facing a pitched effort to turn government into a theocracy that is driven by religion. And in my next column, I explained how we can fight these abortion bans using the RFRAs.

We are facing a pitched effort to turn government into a theocracy that is driven by religion.

One of my former students from Cardozo Law School, Danielle Moriber, reached out and said she wanted to do something. And very quickly we were up and running and interviewing potential clients and bringing in another firm which is led by another former student, Vivek Jayaram. We now have two law firms and my team of two lawyers and three law students working pro bono. We’re asking the courts to consolidate the five cases because the facts and theories are similar.

Many states with laws restricting or banning abortion access also have RFRA laws. What are the implications of the Florida suits for potential challenges to these states’ abortion restrictions?

This is just a fascinating cultural moment, because the states that have very restrictive abortion laws map almost one to one to those states that have enacted these RFRAs. Essentially what you have is the states with abortion bans have laws on the books that say that they have to accommodate religious believers. The problem here is that those who lobbied for both were from the right and were thinking in terms of the religious needs of conservatives, the Evangelicals and the Catholics, and it simply didn’t occur to them that there are progressives and moderates who have religious beliefs that support abortion.

When these kinds of lawsuits first came into the public square, the Becket Fund, which is a big supporter of RFRAs and apparently the abortion bans, told the press that the people on the other side don’t have “deeply held religious beliefs” about abortion. That’s just false.

I have heard from clergy in other states—and of course I’m more than willing to talk to anybody that’s interested in this. But we are working out our arguments with the idea that they can then be applied in states where the bans and RFRA laws co-exist.

You recently filed a preliminary injunction motion to have H.B. 5 halted while the clergy’s lawsuits are in litigation. What is the basis of the filing?

Planned Parenthood applied for a preliminary injunction based on privacy rights claims. They succeeded, but then it was put aside for technical legal reasons in Florida. An appellate court ruled in August that they had no right to an injunction. And so, on the privacy theories at this point in Florida, you can’t stop H.B. 5. We shall see what the Florida Supreme Court says.

What we’re arguing is that there is a clear violation of fundamental free speech rights, because the statute is so vague that you can’t fully know what’s criminalized. A lot of people have questioned how the clergy could possibly be subject to criminal liability. And the answer is: that’s just the way criminal law works—aiders and abettors are punished identically with someone who did the crime themselves.

If a law is void for vagueness under long-settled First Amendment principles, it must be invalidated in its entirety. And Florida would have to go back to the drawing board. So, we have a powerful bedrock constitutional principle that is a very strong argument for an injunction, because this law is violating our clients’ and many Floridians’ constitutional rights every single day.

What makes these lawsuits unusual among religious liberty-based arguments about abortion?

There are very few of these cases filed so far, but I expect to see more. What’s different here is that we are not going forward with respect to just one faith. These lawsuits demonstrate to the courts and the public that there is a wide swath of American believers whose faith is burdened by the fact that a narrow set of religious beliefs have now become the law of abortion.

What these lawsuits are doing is flipping the script. The public has been repeatedly told that the anti-abortionists are on a high religious ground and that everybody else is just a secularist. But what the lawsuits are doing is fixing that error by saying, “The believers who support choice are also on a high religious ground.” And so now we must pivot to a discussion of diversity and truth on this issue. For the nation, I think that’s the most important part of these lawsuits.