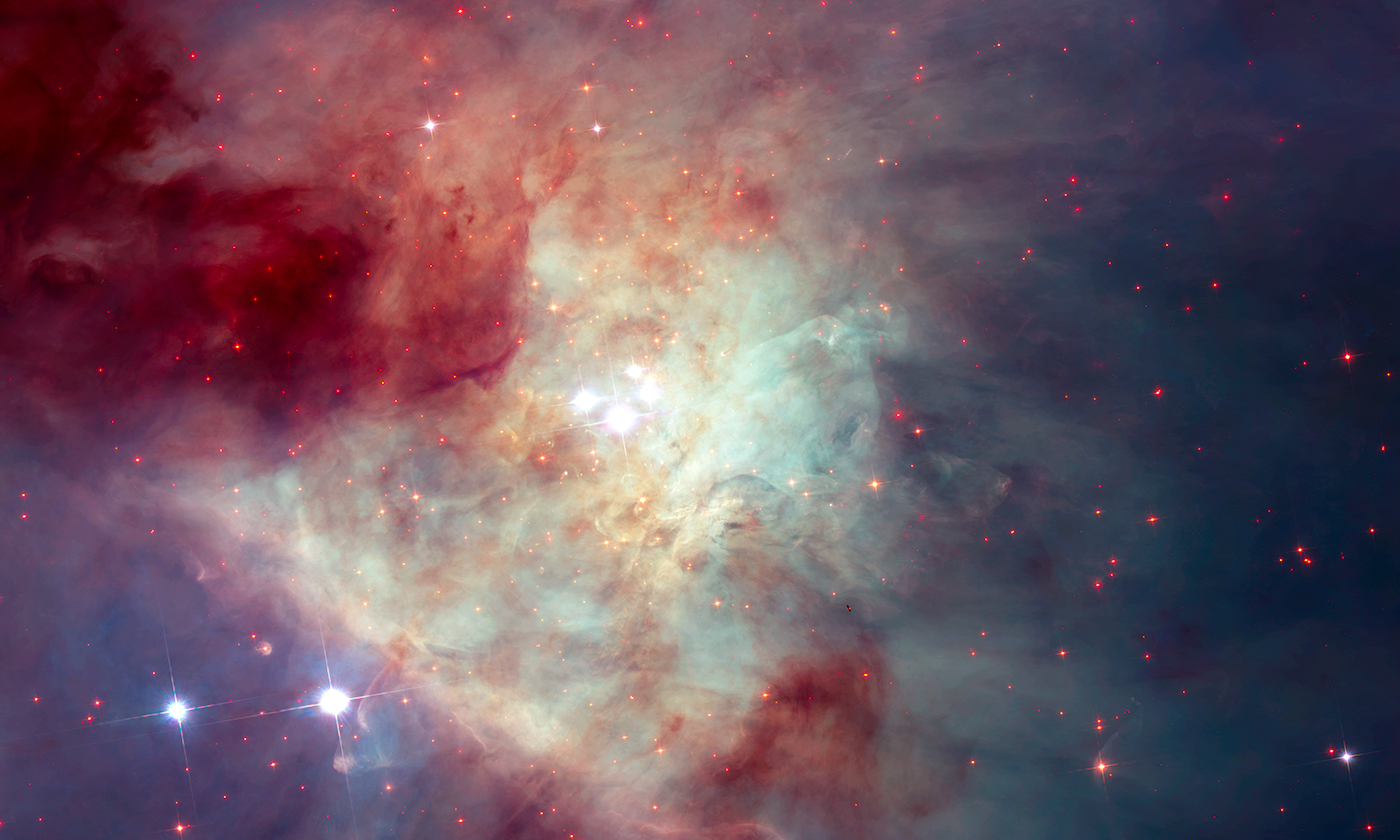 For most of us, it can be difficult to understand what is going on at the cutting edge of scholarship. OMNIA 101 offers readers a peek into what faculty do every day in their classrooms, and how they bring their expertise to the next generation.

As images of a black hole appear for the first time, topics like dark matter and dark energy are garnering more and more interest. Mark Trodden, Chair of the Department of Physics and Astronomy and Fay R. and Eugene L. Langberg Professor of Physics, and Masao Sako, Undergraduate Chair and Associate Professor of Physics and Astronomy, both explore the universe—but they do so from different, complementary approaches.

Trodden, a theoretical physicist, constructs mathematical models in an effort to explain the cosmic data that observational astronomers like Sako obtain using telescopes and other tools. Here, they discuss the research that continues to fascinate them.

What are dark energy and dark matter?

Trodden: Just as planets rotate around the sun, stars rotate around the center of the galaxy in a way that depends on how much matter near the galaxy’s core is pulling them toward it. But the rate at which stars rotate is very different from what we might expect if the only matter in existence was the stuff we see glowing in a galaxy. Where is the rest of the mass that’s causing this behavior? We can’t see it, so we call it dark matter.

Dark energy is an even deeper problem. The universe is expanding, meaning faraway galaxies are moving away from us. But we know gravity is an attractive force. If you jump up off the surface of the Earth, you are attracted back to it. So you would expect that things that are moving away from us would be slowing down, because they’re attracted to everything else in the universe. A remarkable discovery from 1998 shows that this is not happening. Distant objects are actually speeding up in moving away from us, which is contrary to everything we understand about gravity and matter. Something mysterious is making this happen. We call it dark energy.

Sako: We know very little about the physical nature of dark matter and dark energy. With dark matter particularly, it’s almost embarrassing for observers like me that after decades of taking data and trying to detect it, we still have no idea what it is. We do know that dark matter makes up 85 percent of all the matter we know and see. And matter—both dark and normal—makes up only about 27 percent of all of the combined matter and energy in the universe. The rest is dark energy.

What makes each of your approaches to the study of these phenomena unique?

Sako: An observational astronomer like me “observes” the sky, using telescopes to take pictures. We use cameras rather than our eyes and analyze the images with computers. I sometimes take trips to observatories in other states or countries to acquire data.

I study type Ia supernovae. A supernova is a huge explosion that happens when a star dies, or multiple stars die. We’re trying to measure the distances to thousands of supernovae we’ve identified, literally in centimeters. Doing so tells us the expansion history of the universe between now and every supernova that we have measured, which gives us a good idea of the expansion history between now and the farthest supernova that we’ve found, and tells us how much dark matter and dark energy exist.

Trodden: Masao and his colleagues have made great strides in revealing dark matter’s behavior and the existence of dark energy. Theorists like me are struggling to explain these phenomena and interpret them in terms of our theories of fundamental physics. To most people, my work looks like mathematics, using pen and paper, and a computer to some extent. A lot of my day is also spent socially, standing at blackboards with my postdocs, colleagues, graduate students, and sometimes undergraduates, trying to hammer out new ideas.

If I were to roll steel bearings along a table, you would just watch them roll in straight lines. If they did not, you might suspect that something else was going on, like maybe I’ve got a magnet under the table. That’s the kind of thing we’re doing with dark matter.

How do we detect and study things that are invisible?

Sako: There’s been a lot of effort to capture dark matter particles, but so far, that has failed. We can still study dark matter by looking at the normal particles that surround it—looking at the motion of the stars in a galaxy and measuring how much dark matter there is inside that radius where the star is circling. We can do the same thing with galaxies and a cluster of galaxies, measuring the velocities of the galaxies around it.

The supernovae we’re studying are all roughly the same luminosity; they emit the same number of watts of energy per second. We can measure the distances to those explosions by measuring how bright they appear to us, and so if we do that at many different distances, it gives us a way to map out the expansion history of the universe between now and then.

Trodden: You’re inferring the existence of something from the behavior of other things. If I were to roll steel bearings along a table, I would release them at one end and you would just watch them roll in straight lines, as you would expect. If they did not roll in straight lines, you might suspect that something else was going on, like maybe I’ve got a magnet under the table. That’s the kind of thing we’re doing with dark matter.

Light travels at a finite speed, so the farther away supernovae are, the longer it’s taken light to get to us, and therefore their speed gives you information about something that happened earlier in the universe.

There has been an influx of new data from projects like the Dark Energy Survey. How has this influenced your work?

Sako: The next five years is going to be all about the analysis of this wonderful dataset, hoping that something will pop up that will tell us more about dark matter and dark energy. There’s also a new experiment called LSST, or Large Synoptic Survey Telescope, which is a much bigger version of the Dark Energy Survey. Over the next 10 years, it will give us a more detailed map of the universe and tell us where dark matter exists.

Trodden: I’m hopeful that the kinds of observations that Masao and his colleagues are doing will give us a handle on the question of whether Einstein’s description of gravity is slightly modified. That’s a radical idea and is something many theorists here at Penn have played a central role in exploring, both connecting it to data and exploring its deep mathematical implications and whether it makes sense as a theoretical proposal. The answer to that would blow open theoretical physics.

I try to train my students so that they’re not so fixed on any particular idea. I teach them the evidence and what it could mean without giving them my biases.

How do you teach the next generation of physicists and astronomers to carry on research on dark matter and dark energy?

Trodden: It’s one thing to tell students, “Scientists know about this or that.” It’s another thing to be at a university like Penn, where there’s a huge amount of cutting-edge research going on, and say, “This work’s being done here by my colleagues and me.” I’ve taken things into classrooms—and Masao has, too—that were not known when I taught the class the year before, and that’s a great way to get people interested.

Sako: I try to train my students so that they’re not so fixed on any particular idea. I teach them the evidence and what it could mean without giving them my biases. I don’t want my students to share those, because if we all did that, we would just channel into a corner. I want to make sure that students have an open mind and trust data rather than what other people think.

Will we ever fully understand these phenomena?

Sako: Dark energy, I think, is too complicated. I’m not expecting to understand what dark energy is in my lifetime, but I’m hoping that before I die, I will know what dark matter is.

Why should dark matter and dark energy matter to any of us?

Trodden: We didn’t go to the moon with the vague hope that there would be gold there; we went because we thought it would be fascinating. It’s intellectual exploration. We want to know what the world is made of and how it works. We’re lucky that science fiction and popular science representations have painted the work that we do in such a flattering way. We are very happy to have that level of interest from people outside of science.

Sako: I don’t think anyone should particularly care about dark matter and dark energy, but basic science should not be about your immediate needs. You need to push boundaries and try to understand everything around you in every way possible. If we stop doing that, we’re not going to make advances in technology or in humanity.