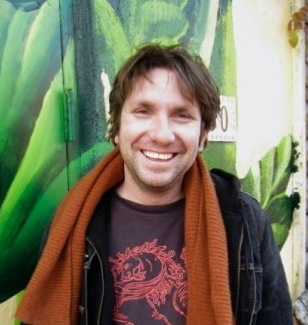 Although they portray the wild, blockbuster nature documentaries such as March of the Penguins and Planet Earth rely heavily on techniques of craft. These can range from attributing human characteristics to “charismatic megafauna” (attractive animals with popular appeal, like panda bears and elephants) to the use of emotive soundtracks. But what if these works represented all we could ever see of the environments they portray? Such is the case, says English graduate student Jason Zuzga, of the worlds depicted in nature documentary’s newest iteration—3-D molecular biological animations.

Although these animations might seem an unusual topic for English doctoral research, Zuzga discovered they fit right into his dissertation on “collaborative epistemologies”—the products of different disciplines coming together to speak to the public about specialized knowledge. He places the animations in a trajectory that includes Jacques Cousteau’s first film, The Silent World, which the scientist made with film director Louis Malle, as well as Two Laws, made by an aboriginal community in Australia in collaboration with avant-garde filmmakers in Sydney. The latter, considered a groundbreaking documentary film, uses aboriginal storytelling conventions to outline the clash in legal customs between indigenous Australians and white Europeans settled in Australia. These “hybridizations of art and fact,” Zuzga says, “use aesthetics as cognitive bridges that allow the public to become oriented in unfamiliar spaces.”

“The nano-bio frontier is going to have an increasing impact on our human-scale lives. Whoever controls the public imaginary’s understanding of life itself can set the agenda for what is possible in that frontier space.”
– Jason Zuzga

Zuzga first discovered 3-D molecular biological animations when his brother David, a geneticist, showed him The Inner Life of the Cell, developed in 2005 to teach biology undergraduates about the complex interactions in a living cell. Made by BioVisions, a Harvard initiative that employs multimedia to communicate ideas in biology, and the animation studio XVIVO, Inner Life excited Zuzga because it visualized phenomena that can never been seen by the human eye.

By interviewing the Harvard and XVIVO teams, Zuzga discovered that much of the rendering in BioVisions’ animations depends on the intuition and imagination of the animators in dialogue with scientists. The animators differentiate between what they call “simulations” and “artist’s renderings.” The former are visualizations bound to a quantitatively determined scale of cellular phenomena, while the latter manipulate sound, colors, and scales of space and time. A combination of the two allows viewers to access what would otherwise be invisible as well as creates gripping, visually appealing narratives.

In Inner Life, for example, depictions of protein structure are simulations, but the environment in which they operate resembles an undersea coral reef. “The head of the project thought it would connect a non-gravitational realm which the public is familiar with to one that is alien,” Zuzga says. The star of the animation is the protein kinesin, which Zuzga describes as a “charismatic molecule” whose actions resemble that of the bewitched broom in the classic Disney animation, The Sorcerer’s Apprentice. And, in The Mitochondria, another BioVisions/XVIVO animation, a frenetic, fly-through view of a protein-filled plain references the asteroid field Hans Solo navigated in The Empire Strikes Back.

Zuzga believes it’s crucial to parse the creative choices involved in these animations because there is no objectively “true” way to visualize molecular phenomena. “As we fumble toward knowledge, these tools’ power to seem real makes them both effective and volatile,” he says. Indeed, Inner Life has found itself embroiled in paradoxical controversies. On one hand, some biologists have criticized it for oversimplifying and anthropomorphizing the cell interior, worrying that its photorealism could taint students’ future understanding of this space. On the other, creationists have used its beauty as further proof of divine artistry—a slightly altered version of the animation was used without permission in a film promoting creationism.

The close relationship between English and Cinema Studies programs at the School of Arts and Sciences and Penn’s interdisciplinary emphasis have nurtured Zuzga’s work.  He was able to take an intensive one-week introduction to contemporary wet lab molecular biological techniques at the Penn Genome Frontiers Institute, and this year, he is a Penn Humanities Forum graduate fellow. Zuzga’s dissertation committee also draws from a number of departments and includes the Donald T. Regan Professor of English Charles Bernstein, a poet who is interested in questions of media, aesthetics and audience; Karen Beckman, the Elliot and Roslyn Jaffe Professor of the History of Art; English professor Timothy Corrigan, an expert on documentary film; and John Tresch, an associate professor in the Department of the History and Sociology of Science.

Zuzga is currently comparing different animators’ methods of rendering the same biological phenomena to see if and how audience affects the aesthetic decisions they’re making. 3-D molecular biological animations have only become possible in the last decades, beginning with a 1981 animation of the tomato bushy stunt virus—the first viral structure to be described at atomic resolution. But their applications now range from getting students interested in microbiology to persuading biotech investors and policy makers. They also capture the imagination of the general public—Inner Life, for instance, went viral on YouTube and earned a report on “The ABC World News.”

“The nano-bio frontier is going to have an increasing impact on our human-scale lives,” Zuzga says. “Whoever controls the public imaginary’s understanding of life itself can set the agenda for what is possible in that frontier space.”