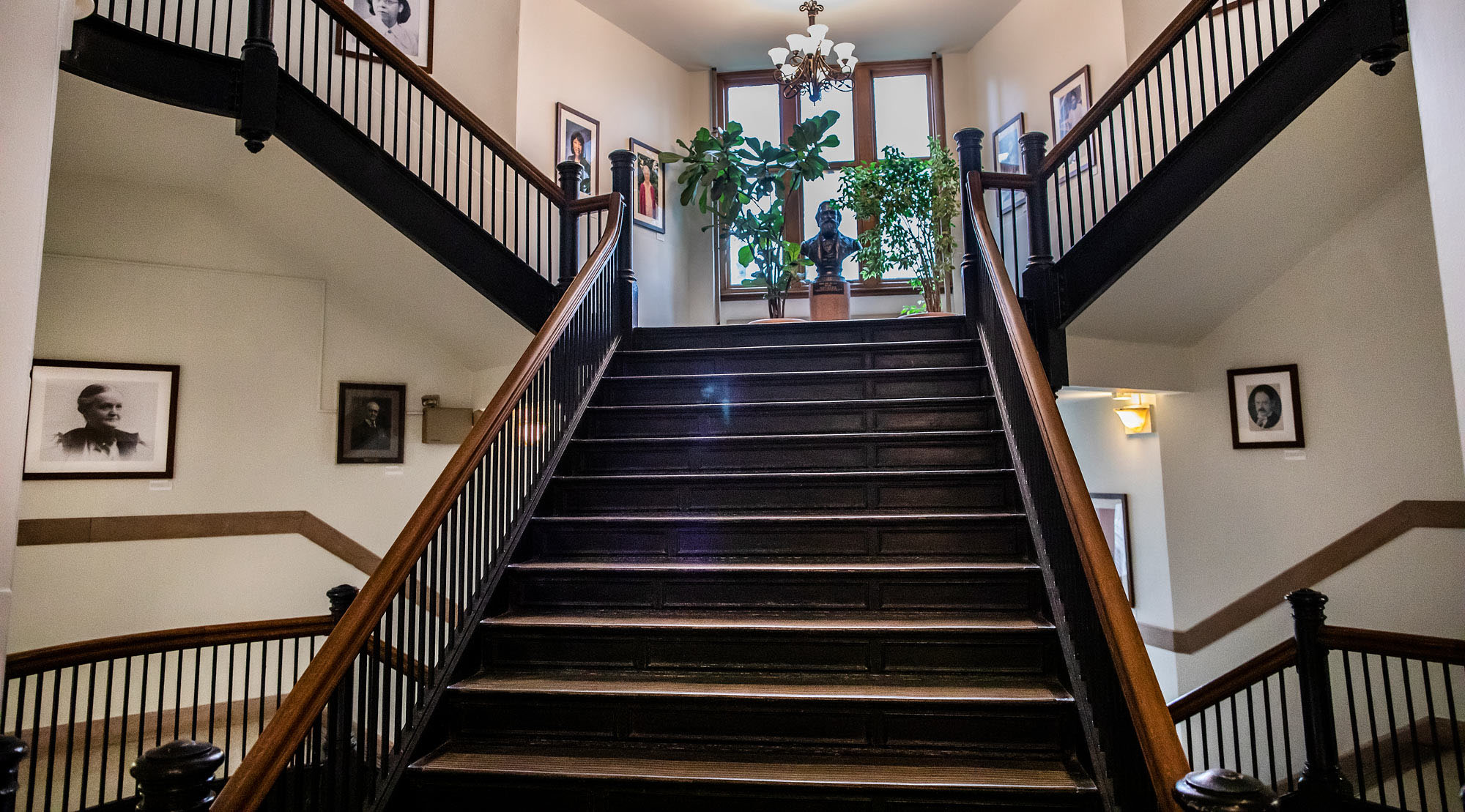 The Changing Face of Portraiture at Penn

The Department of Biology joins in campus-wide efforts to diversify those honored in portraits and rethink how to approach representation through art.

Photos Courtesy of the Department of Biology

A grand split staircase inside the entrance to Leidy Labs invites visitors into the home of the Department of Biology. As students ascend or descend on their way to lab meetings and classes, a set of faces looks down on them—not the old, gilt-framed portraits that long hung in the stairwell, but 14 new photos in chestnut-colored wooden frames, depicting scientists who have close connections to the University and the department. The gallery now highlights a more diverse suite of individuals, such as Emily Gregory, the first female teaching fellow at Penn, and Roger Arliner Young, the first African American to earn a doctorate in zoology.

The new art is part of a collective effort by the department, working with guidance from the University Curator’s office, to rethink how portraiture and representation operate in the halls of their buildings. Many other University departments, schools, and leaders are in the process of undertaking similar initiatives, driven in part by the question: How can the walls of campus buildings better reflect the communities they serve?

The changes are meant to enhance a sense of inclusion for all at the university, notably students, says Gwendolyn DuBois Shaw, Class of 1940 Bicentennial Term Associate Professor. “There are certain contexts that students, in particular, want to assert that they belong,” she says, “that they are not just at Penn, but they’re of Penn.”

Portraits at Penn often honor department chairs, deans, or others who have ascended to the top ranks of the academy. Sometimes they depict thought leaders in a field, who may or may not have a direct connection to the University. And occasionally donors write into their gift agreement that a portrait will be hung in recognition of their philanthropy. The result, however, can mean building walls that function like memorials or museums, highlighting the past but not the current community, or a hoped-for future one.

In the Department of Biology, the process of rethinking portraiture began when Joshua Darfler, department manager, and Mecky Pohlschröder, Professor of Biology, realized they didn’t know who most of the people pictured in portraits in Leidy were. After some investigating, Darfler found that many had no discernable connection to Penn whatsoever.

In June 2020, amid widespread Black Lives Matter protests, Junhyong Kim, Patricia M. Williams Term Professor of Biology and Chair of the department, together with Dani Bassett, a professor in the School of Engineering and Applied Science, as well as other faculty and staff, addressed an open letter requesting institutional and financial support for diversifying portraiture at Penn.

“Many spaces at Penn reflect its history but do not reflect our core values of diversity and inclusion, nor do they accurately reflect the student, staff, and faculty bodies that comprise the Penn of today, or those we envision to comprise the Penn of tomorrow,” they wrote. More than 430 members of the Penn community signed the letter.

Kim says that both tracking down the provenance of the original Leidy stairway images, and then identifying financial support to replace them presented a burden that delayed their removal.

“The cost can be non-trivial,” says Kim, who notes that he would like to replace or augment images still in a Leidy classroom. He hopes that the University develops additional solutions and support “to nimbly solve local problems, which have disproportionate impact on students and local communities.”

Aside from funds, another challenge, says Shaw, is that historic portraits of people of color or women are sometimes difficult to come by.

“Historically, formal portraits, like paintings and sculpture busts, were really reserved for the elite,” she says. “Not everyone had a portrait made and not every family preserved portraits.”

Historically, formal portraits, like paintings and sculpture busts, were really reserved for the elite. Not everyone had a portrait made and not every family preserved portraits.

The initiative also benefitted from the work and perspective of the current generation of students.

“As a member of the Leidy artwork committee, it was a very special opportunity to discover the history of our department with people from different backgrounds,” says Dajia Ye, a Ph.D. student in the Department of Biology. “This project reminds us that everyone in the department now is also part of the history, and what we are doing is making positive changes for the department and even the university. The Leidy artwork project is one of the initial steps of our department’s DEI work, and I think it is inspiring and encouraging for us to move to make our department a better place for everyone.”

Diversifying portraiture may encompass a greater diversity of techniques and platforms, in addition to a more inclusive set of subjects.

“You can consider a multi-pronged approach,” Shaw says. “It may be really interesting to have portraiture represented in displays on campus that can be active, perhaps with an easily updatable digital platform or video installation, to give prominence to the changing nature of the community.”

Heather Schiller, also a Ph.D. student in the department, says it was a great honor to be a part of the redesign process to highlight diverse scientists from underrepresented groups. “The gallery redesign emphasizes that scientists from all backgrounds are valued and that anyone can be a scientist, not just those historically depicted in the field,” she says. “Diversity and representation matter, and the place in which you go to school and work should make you feel like you belong. I hope the students who walk through the building can see themselves as scientists through seeing people just like them represented on the walls.”

After completing her studies at Wilson College, Tsukamoto came to Penn in 1895 as a graduate student focusing on botany and biology, where she was the first Asian American woman to matriculate.  Tsukamoto received a fellowship to study at the University before returning to her home town in Japan where she went on to teach at Kobe College and Higher Girls' School.

In 1882, Mossell became the first African American to earn a medical degree from Penn. Because of his race, Mossell had to travel abroad to complete his medical internship in England before returning to Philadelphia to help open the Frederick Douglass Memorial Hospital. The hospital was only the second in the nation that would treat Black patients and train Black physicians.

In 1941, Hinton, while working as a lab technician with Harvard Professor John Howard Mueller, published the protocol for the Mueller-Hinton Agar, which today is frequently used for bacterial antibiotic susceptibility testing. Hinton went on to become one of the first two Black women to receive their Doctorate in Veterinary Medicine from Penn. During her veterinary career, Hinton worked as small animal vet and as a federal inspector.

Pennington completed the requirements for a B.S. in chemistry and minor in botany and zoology in 1892 at Penn, but only received a certificate of proficiency because of her gender. She nonetheless continued her studies and ultimately received a Ph.D. in chemistry in 1895. Pennington went on to serve as the Chief of the Food Research Laboratory at the USDA, and developed important food safety standards for poultry, milk, and dairy products.

Jayne received his M.D. from Penn in 1882 and went on to serve as a professor at, and later Director of, the Wistar Institute. Jayne was then appointed as one of the inaugural professors of the newly formed Department of Biology. He personally donated a large sum of money to help finance the construction of the department’s first building, Biological Hall, located where Goddard Laboratories now stands.

In 1886, Gregory received her doctorate degree in botany from the University of Zurich, Switzerland, becoming the first American woman to receive a Ph.D. in botany, and one of the first to receive it in the sciences. After teaching at various universities, she was hired at Penn as a teaching fellow in the Department of Biology, making her the first woman to hold an instructor position. Penn’s Gregory College House is named in her honor.

Snowden received her B.S. in biology from Penn in 1898, and was named the First Advisor to Women in 1919. In this role, she became the first administrator responsible for the wellbeing of female students at the University. The editors of Women’s Undergraduate Record for 1921 noted, “The girls feel they have a friend who is their very own.”

Cheney and her husband, Robert Seyfarth, a professor in the Department of Psychology at Penn, revolutionized the way primate field work was conducted by combining both observation and controlled experiments. Cheney was elected a Fellow of the Center for Advanced Study in the Behavioral Sciences in 1983 and the American Academy of Arts & Sciences 1999, and became a member of the U.S. National Academy of Sciences in 2015.

Young completed her doctorate work at Penn in 1940, becoming the first African American woman to receive a Ph.D. in zoology. Upon graduating, she accepted a position at the North Carolina College for Negroes and then at Shaw University in North Carolina. She was ultimately banned from working in North Carolina due to her efforts to unionize tobacco workers, thus forcing her to leave her home and academia to pursue employment elsewhere.

Inoué, referred to as “the father of cytoskeleton dynamics,” built the first light microscope capable of visualizing dynamic cell processes and co-invented video microscopy. As a Professor of Biology at Penn from 1966 to 1982, he researched biophysics and cell biology. Inoué then left the university to join the Marine Biological Laboratory as a researcher, and was later elected as a Fellow of the National Academy of Sciences in 1993.

Giles-Gee earned her degree in psychobiology from Penn. She then went on to receive a M.S. in science education and a Ph.D. in measurement, evaluation, and techniques of experimental research from Penn and a M.S. in zoology from Rutgers University. Giles-Gee held many prestigious positions including Provost of Rowan University, President of Keene State College, and the 22nd President of the University of the Sciences in Philadelphia.

De la Mata completed his graduate work in the Department of Biology at Penn in 1988, and then committed his career to promoting biodiversity, conservation, and sustainability. He is the founder of Ecosystem Services LLC and has held several high-level positions such as Chairman of the World Bank's Inspection Panel, founder and CEO of Wetlands for the Americas, and Director and Vice-President of WWF's Latin American and Caribbean Program in Washington.

Waldron joined the Department of Biology at Penn in 1968 as an assistant professor. She was the first female member of the standing faculty and the first female professor to receive tenure in the department. Since becoming an emeritus professor, she has devoted her time to training, and engaging with, science teachers to create more equitable and meaningful STEM education experiences for high school students.