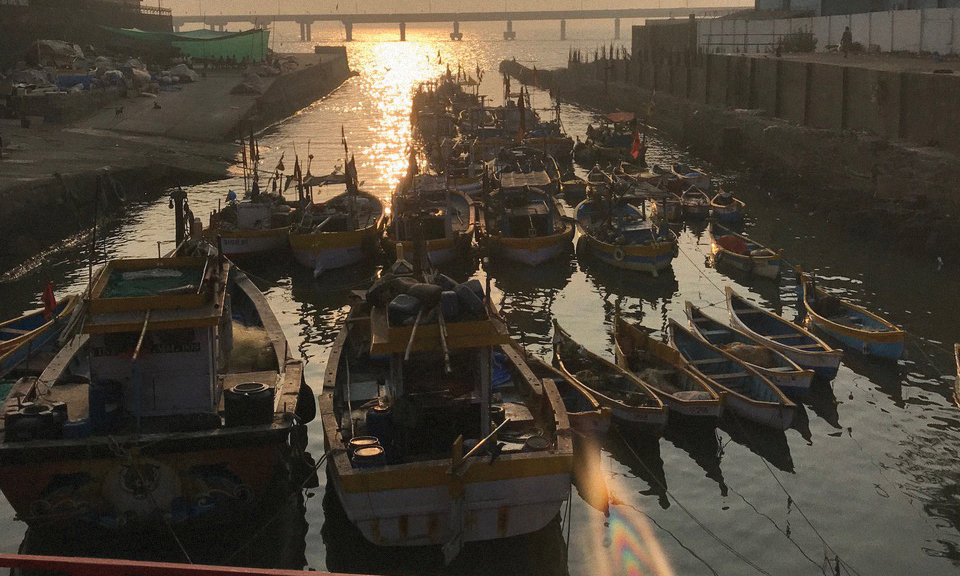 Beyond the Margins of Land and Water

Five years after Hurricane Maria killed 3,000 people and damaged 80 percent of Puerto Rico’s power grid, the island is now reeling from another catastrophic storm. Hurricane Fiona, which made landfall on September 18, unleashed more than 30 inches of rain in some areas, causing flash floods, shutting down the public water and sewer system, and plunging nearly all of Puerto Rico into darkness.

Halfway around the world, a record monsoon that triggered massive flooding submerged a third of Pakistan. More than 1,500 people died and tens of millions lost their homes. The floods, which have been described as apocalyptic, were likely driven by climate change, confirms a new study by 26 scientists affiliated with the research initiative World Weather Attribution. About 75 percent more water is now falling during Pakistan’s monsoon season, which began in June this year following months of scorching heat and drought. While the country is responsible for less than one percent of global carbon emissions, it is one of the regions hardest hit by—and least prepared to withstand—anthropogenic climate disasters.

“The massive flooding that is taking place in the world today is the outcome of both carbon emissions, on the one hand, and infrastructured landscapes, on the other,” says Nikhil Anand, Associate Professor of Anthropology. “Anthropogenic climate change—changing weather patterns, melting glaciers, intensifying monsoon cloud bursts—and an infrastructured landscape that magnifies these disasters, work together to produce these massive crises.”

An environmental anthropologist, Anand studies how the intersections of climate change, infrastructure, and state power affect cities and their most vulnerable residents. He is the author of Hydraulic City: Water and the Infrastructures of Citizenship in Mumbai, an award-winning study of how the poor in Mumbai—a city on the western coast of India that sustained heavy flooding in 2005—access water supplies amidst technological uncertainty and political marginalization. Anand also co-edited, along with UCLA’s Akhil Gupta and Hannah Appel, The Promise of Infrastructure, a volume of essays that examines the politics of infrastructure. He is also the Director of Envirolab, a workspace supporting graduate research on environment-society relations.

It is not just a material process through which wetlands are solidified. It’s a social process, a political process of placing vulnerable groups in harm’s way.

At the heart of Anand’s research is water—its governance, its presence, and its absence. He has co-directed two multidisciplinary initiatives, Rising Waters and Inhabited Sea, that explore the impact of water in its many forms on the past, present, and future of cities.

Supported by the Penn Arts & Sciences’ “Making a Difference in Diverse Communities” initiative, which facilitates research that addresses inequities and global challenges, Rising Waters considers the future of rivers and coastal cities by comparing Philadelphia and Mumbai, two cities with a history of building industrial infrastructure on landfilled wetlands. Found at the margins between land and water, these converted wetlands often sit in close proximity to communities that have been racialized and classed.

“It is not just a material process through which wetlands are solidified. It’s a social process, a political process of placing vulnerable groups in harm’s way,” Anand says. Rising Waters was also led by Bethany Wiggin, Associate Professor of German and Founding Director of the Penn Program in the Environmental Humanities.

Inhabited Sea—which Anand co-directed with the late Anuradha Mathur, Professor Emeritus of Landscape Architecture in the Weitzman School of Design, and her partner Dilip da Cunha—is a research collaboration with architects, artists, citizen scientists, oceanographers, social scientists, and urban planners working in Mumbai. The project began in 2019, emerging out of Mathur and da Cunha’s work in response to the Mumbai floods in 2005, which left parts of the city underwater and killed over 5,000 people in the span of 24 hours. Mathur and da Cunha published their research in Soak: Mumbai in an Estuary, which reimagines the city as relentlessly wet terrain—an estuary sitting between the sea and the monsoons.

“Building on Mathur and da Cunha’s work, we asked what might happen if we think about wetness not as a problem to be resolved but as a condition from which to think and design,” Anand says. “What kinds of futures of the city might be imagined from there?”

Along with Anand and Wiggin, several undergraduate and graduate students at Penn and the Tata Institute for Social Sciences in Mumbai contributed to Rising Waters, engaging in ethnographic and historical research over a three-year period. The project culminated in a collection of essays that was recently published in the International Journal of Urban and Regional Research.

A few of the studies investigate how certain governmental projects produce harm. For instance, in her study Wiggin shows that, in Philadelphia, administrative decisions to build oil refineries on the city’s former wetlands, where many Black and low-income residents have been forced to relocate, has exposed these communities to enduring harm. “We find refineries and other kinds of toxic industries at the margins of land and water,” Anand says, “and of course, these are the margins of land and water that are most at risk as sea levels rise, as floods become more common both in Philadelphia and in Mumbai.”

Bureaucratic actions—and oftentimes, inactions—around water governance have also contributed to continual water crises in both cities, Anand says. In Mumbai, the sewage department has long released untreated sewage into the Arabian Sea, evading national water quality standards and creating toxic environments for those who live on the coast. In Philadelphia, water mains burst and lead contaminates the water pipes on a regular basis.

I think there’s something really exciting in how the city recognizes that the existing way of doing things can only be temporary—that more durable and enduring ways of dealing with flooding or water need to account for how the city continues to be wet by the sea, on the one hand, and the rain, on the other.

“Why is it that it’s too costly to repair mains or to remove lead from water pipes or to ensure reasonable water quality for some populations when the costs of doing that for others don’t matter at all?” Anand asks. The results of Rising Waters suggest that these crises—currently mirrored in the water shortages facing the largely Black residents of Jackson, Miss.—stem from “racialized acts of administrative ignorance—not just of not acting, but knowing not to act, knowing not to know.”

Like Mumbai and Philadelphia, Jackson has struggled for decades with water issues because of aging, poorly maintained infrastructure. The crisis reached a boiling point in August when record levels of flooding damaged a major pump in the city’s main water treatment facility. “Administrative decisions of investment or under-investment or divestment continuously expose people to harm in cities like Jackson, but also in many cities around the world,” Anand says.

Inhabited Sea continues the work begun by researchers in Rising Waters, this time focusing on the city of Mumbai. The main goals of that project were to investigate how to construct infrastructure landscapes in ways that don’t magnify disasters, and to intervene into ongoing conversations around Mumbai’s climate futures.

The project concluded in early 2021, culminating in a series of public lectures and seminars, as well as publications in Scroll.in, an independent news outlet in India. Later that year, Mumbai city officials started the process of climate action planning—the first attempt the city had ever taken to officially address the climate crisis—with input from Anand, Rhea Shah, a research associate and transdisciplinary environmental designer, and others who had worked on Inhabited Sea.

“Many of us gave expert testimony, bringing what we’d learned from each of our projects into the conversation and into the process of making Mumbai’s climate action plan,” says Anand, who contributed to the sections of the plan concerning water management and urban flooding. Mumbai released its climate action plan this year.

“What’s interesting about that plan is that it’s not just about adaptation—how to manage floods or cyclones or heat waves that mark our climate emergency—but also how to mitigate carbon emissions through the conversion of energy sources and the like.”

Anand explains that the plan’s “Urban Flooding & Water Resource Management” section even promotes nature-based solutions and green infrastructure, “something we were only thinking of with Inhabited Sea.” He continues, “I think there’s something really exciting in how the city recognizes that the existing way of doing things can only be temporary—that more durable and enduring ways of dealing with flooding or water need to account for how the city continues to be wet by the sea, on the one hand, and the rain, on the other.”

Another initiative that developed out of Inhabited Sea seeks to incorporate the voices of those who have endured the most harm from not only climate disasters, but also from the government’s responses to these disasters. Anand co-directs the new project, Stories of Climate Action: Democratizing Planning in Mumbai’s Wetscapes, which is led by Rohit Mujumdar, an assistant professor at the School of Environment and Architecture in Mumbai, and Lalitha Kamath, an associate professor in the School of Habitat Studies at the Tata Institute of Social Sciences—both of whom worked on Inhabited Sea.

“We’re focusing on three communities—two fishing communities in the western and eastern shorelines of Mumbai and a riverine community in the north—to look at how people are already dealing with some of the effects of climate change that are already here,” Anand explains. “One of the reasons we wanted to do that is because oftentimes, environmental projects to save the city from flooding are very technocratic, not only denying the existence of local knowledges, but actually marginalizing those who are already living in climate change.”

It’s hopeful that we’re not ignoring climate change anymore, but we’re not addressing it fully either.

For example, after the Mumbai floods in 2005, the government proposed the eviction of tens of thousands of informal residents living in the floodplain, so that the river could have space to flood. The new project proposes to gather the stories of how Mumbai’s most vulnerable communities adapt to climate and ecological uncertainty and to include their expertise in urban policy and project interventions.

Anand’s current book project, Urban Seas, also considers the everyday practices of people living with climate change as possibilities for democratizing and rethinking climate action. “I’m interested in how and why, despite other ways of living—marginalized ways of recognizing precarity—these voices are consistently exiled to the sidelines of urban planning and climate expertise,” Anand says.

In Pakistan, the rainfall has decreased, but the deluge remains. It may take six months or longer for the floods to recede in some regions. In others, like the provinces of Sindh and Balochistan, there is nowhere for the water to go, with infrastructure—dams and levees—originally designed to control the flow of water now making matters worse.