Horror Film: Meaning in the Extreme

Philippe Met, Professor of Romance Languages, ushers students to the darkest corners of horror cinema to shed light on its cultural and philosophical importance. 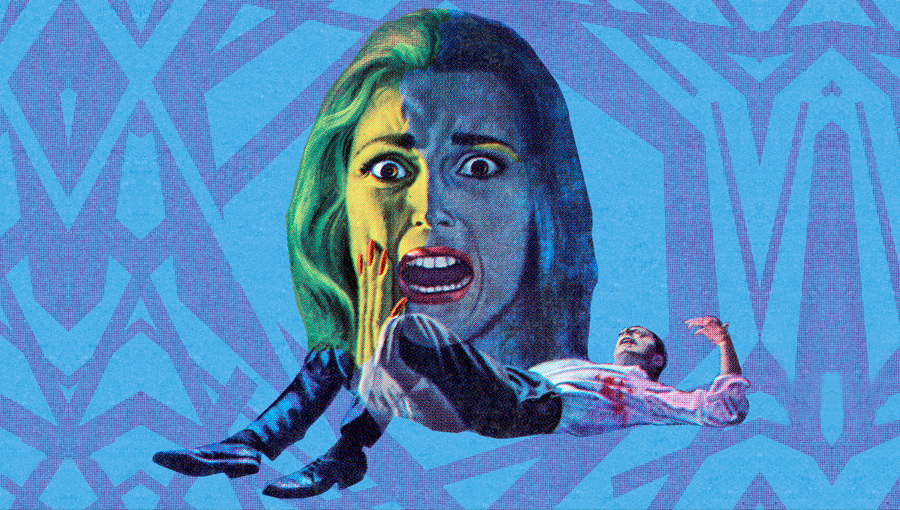 What is your favorite horror movie subgenre? Supernatural? Psychological? Slasher? For Philippe Met, Professor of Romance Languages and instructor of the course Horror Cinema, horror film is so much more than labels and body count—it’s a litmus test for cultural and social norms, and a spark to ignite philosophical discourse.

“It was a way for me to go back to my roots—my original love for horror fiction,” says Met, who launched the course two decades ago. The first iteration, which focused on classic horror, began with German expressionism and progressed through studio mainstays. It proved so popular that he decided to offer more specific versions of the class. The current incarnation explores continental European horror cinema and includes French, Italian, Belgian, Dutch, Polish, Scandinavian, and Czech films from the 1970s to the present, focusing on a number of cult movies that have helped to rejuvenate and redefine the genre.

The course comes with an early disclaimer: “Be prepared for provocative, graphic, transgressive film viewing experiences. Not for the faint of heart!” But Met says many of his students are already connoisseurs, and thus steeled against even the most challenging content. “The class is made up of those in related majors and minors, but also students who are just interested in the subject matter and are taking it as an elective,” he says. “These are not necessarily your typical students—they are very open-minded and intellectually curious.”

An “even more shocking and difficult film to stomach,” Met says, is the infamous Cannibal Holocaust, a 1980s Italian film that has long sparked controversy and calls for censorship due to—among other things—its real-life animal cruelty.

“If you survive this film, you should be able to make it through the rest of the semester,” says Met. “The important thing to remember is the challenge of these films. Many viewers—not just a fringe—find something that other viewers cannot, will not, or refuse to see. But we can safely assume the vast majority of those who enjoy these movies are not sick people, so the purpose of the course is to decide what draws us to this spectacle, and what is the value behind the spectacle of these films? Is it a unique way for us to grapple with these issues and impulses?”

Benjamin Wasman, C’21, says the fact that the class even tackled Cannibal Holocaust at all was extraordinary. “Given its notoriety and sheer quantity of transgressive content, I never imagined being in a class that discussed it, mostly because I hadn’t viewed these films as scholarly until I got to do a deeper dive,” says the junior, who also praises teaching assistant Peter Lesnick, Ph.D. candidate in Italian Studies, as incredibly knowledgeable. “Professor Met ensures that it feels like a space for people who are passionate about the topic to discuss it and learn more about it. He connects thematic elements of the films with his own personal anecdotes. I’ve found myself staying after class upwards of 20-30 minutes just to talk.”

Philosophical themes are rife in horror, Met notes. The mad scientist trope and body horror genre, for instance, often introduce questions—and offer warnings—about medical ethics. Horror even evolves to subvert its own themes. The “final girl” scenario, in which the lone survivor and avenger is female (prevalent in slasher movies, like Halloween), is just one example. “This development subverted a lot of assumptions about the genre—that it was misogynistic and catered only to male viewers,” says Met, who points out that box office statistics reveal horror is viewed equally by both genders.

Examining horror cinema on a national level helps to illuminate the evolution of the genre. Italian horror, for instance, was particularly slow to emerge. It eventually gained traction in the ‘60s and ‘70s when directors like Mario Bava and Dario Argento were instrumental in establishing the subgenre referred to as giallo, a cohort of films often described as horror-thrillers that emphasize violence and eroticism. Giallo movies like Bava's 1964 Blood and Black Lace went on to directly influence American slasher and body count films.

“The class is great because I get to watch films that I probably never would have come across otherwise," says Alexandra McGeoch, C’20, who is taking the class for French credit and says the course has led her to become familiar with French cinematographic terms she never would have learned in her other French classes. "There are gory films, but also ones that don't rely on carnage and violence to terrify viewers, such as Spoorloos and Le Locataire (The Tenant). Exposing students to an array of types of horror films keeps the class from ever being boring or monotonous.” The aforementioned Spoorloos, or The Vanishing (not to be confused with the 1993 American remake of the same name), was directed by George Sluizer and released in 1988. The film deals with existential moral psychology—another important philosophical theme in horror—as the protagonist goes to extreme measures to discover the fate of his disappeared girlfriend.

Another important modern development in the genre is the new wave of French horror, often referred to as New French Extremity. Emerging in the early 2000s with films like Alexandre Aja's 2005 Haute Tension (High Tension); Alexandre Bustillo and Julien Maury's 2007 À L'intérieur (Inside); and Pascal Laugier's 2008 Martyrs, the films from the movement—which was largely not prophesied by any preexisting national film trends—often use ultraviolence as a means of addressing challenging humanistic themes like anxiety about pregnancy (À L'intérieur) or transcendence-through-violence (Martyrs).

The Spanish cluster of horror films Met screens includes Guillermo del Toro's 2001 El Espinazo del Diablo (The Devil's Backbone), a film set against the backdrop of the Spanish Civil War, an example of how horror can be used to reexamine issues of humanity during violence and conflict, Met says. This is also true of Agustí Villaronga's 1986 Tras el Cristal (In a Glass Cage), which addresses war crimes.

Where is the horror genre headed? Met says envelope-pushers are constantly emerging, like Swedish director Tomas Alfredson's 2008 Låt den Rätte Komma (Let the Right One In), which crosses into territories of romance and is a "completely new reimagining of the vampire genre," and Jordan Peele’s 2017 Get Out and 2019 Us, which focus on social issues.

“Borders, limits, boundaries—rather than checking boxes when it comes to thematic or regional horror themes,” says Met, “it’s best to look at what happens when the box opens up and areas start to overlap.”