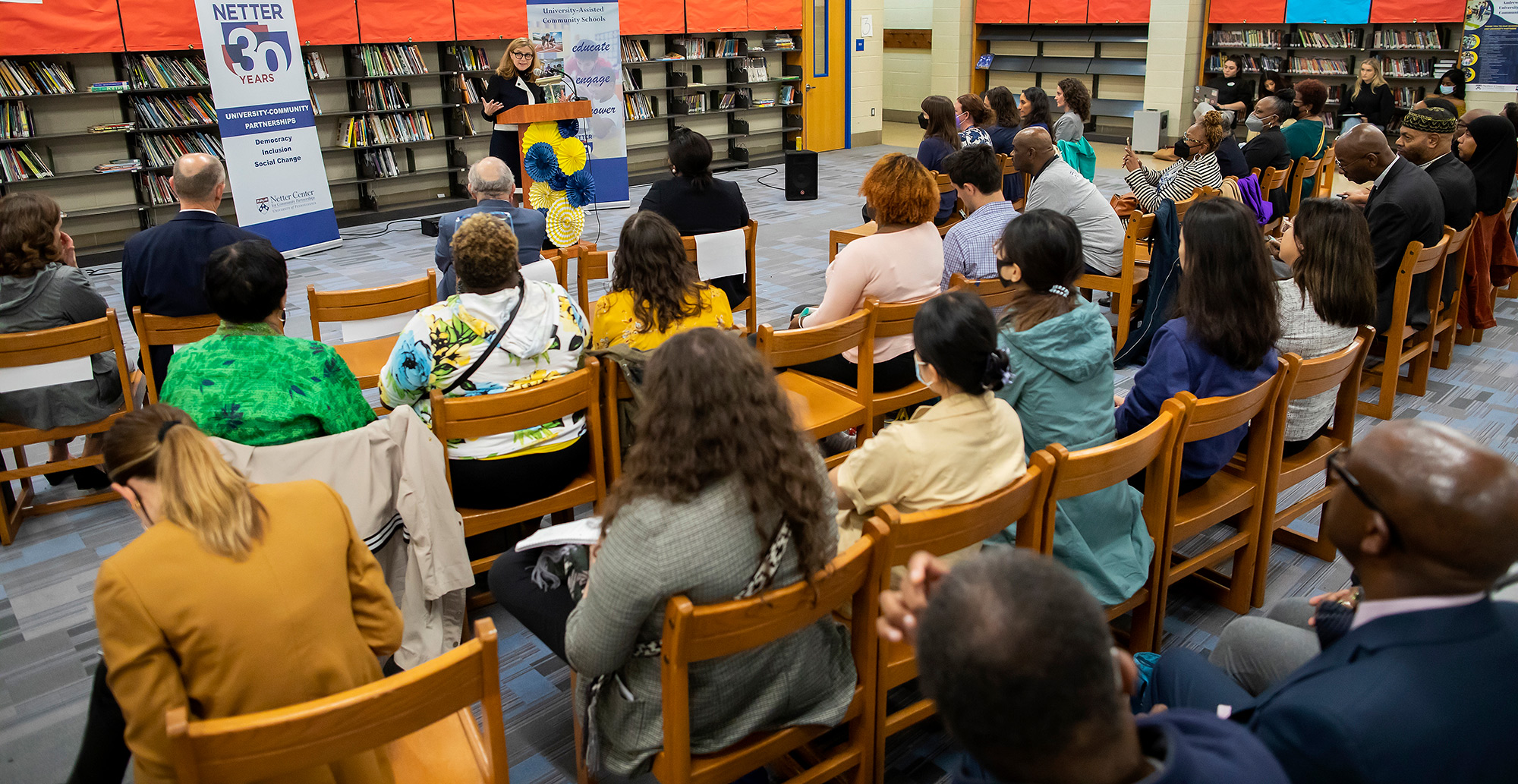 Celebrating the Past—and Planning for the Future

By Susan Ahlborn and Blake Cole

Four programs in the University’s academic community are celebrating anniversaries: Kelly Writers House (KWH), the Center for the Advanced Study of India (CASI) and its counterpart in New Delhi, the University of Pennsylvania Institute for the Advanced Study of India (UPIASI), and the Barbara and Edward Netter Center for Community Partnerships. The combined 110 years of experience, research, education, and collaboration provided by these ground-breaking institutions have had an enormous impact at Penn and in the world.

KWH launched the celebration of its 25th anniversary with a series of events held during Homecoming Week-end. KWH is a 13-room house on Penn’s Locust Walk that serves as a center for writers of all kinds from Penn and the Philadelphia region, with about 500 people visiting each week. KWH hosts about 150 public programs and projects each semester, including poetry readings, film screenings, seminars, web magazines, lectures, dinners, radio broadcasts, workshops, art exhibits, and musical performances.

“A quarter century ago a group of students, faculty, and Penn staff came together in a lovely, old, but somewhat run-down house on Locust Walk to talk about what it would take to make a collaborative, writer-centered space, where novices and eminences had equal say in deciding what events to offer, which admired writers we would invite to visit,” says Al Filreis, Kelly Family Professor of English, Director of the Center for Programs in Contemporary Writing, and Faculty Director of Kelly Writers House.

“Those visits immediately became endless conversations, improvised seminars, literary be-ins,” continues Filreis. “We have learned how to learn from each other, discovering that the open door, the ample food, the bottomless coffee, the soft old couches, were among the key ingredients to an actual writerly education. It felt very radical at the origin. Maybe its radicalism hasn’t diminished but rather, somewhat miraculously, it’s been accepted as part of the campus landscape.”

As KWH celebrates its past, it is also looking to the future. Its “A House of Possibility” campaign—named after Emily Dickinson’s idea of “possibility” as a founding principle—seeks to raise $10 million by May of 2026, coinciding with the 30th anniversary of KWH. The campaign’s Possibility Endowed Fund, established in honor of Filreis, will support all the activity that happens both in KWH and online, including projects, events, prizes, and internships.

“We’ve always done well with support from donors who give annually toward our Friends of the Writers House fund,” says Filreis. “But now it’s time to look to the future, to make sure the Writers House will always be here, doing what it does for talented Penn writers. The Possibility Fund and our program endowments will provide our successors, and their successors, the funding they need to keep the house open, vibrant, and inventive.”

One of the celebratory events hosted a group of “amazing KWH people from across the years,” who reminisced about what KWH has meant to them, including Herman Beavers, Julie Beren Platt and Marc E. Platt President’s Distinguished Professor of English and Africana Studies.

“Our model is the poem that is at first seemingly impossible to understand: alone we are stumped, but then we do a collaborative close reading, and finally we realize that meaning, if it is to be powerful, is always co-created,” says Filreis. “We mean only together.”

The Center for the Advanced Study of India (CASI) was founded in 1992 as the first academic research center in the United States focused on the study of contemporary India. In 30 years, CASI has built a rich and diverse community of India scholars and specialists, and it is unique in its two-way exchange of knowledge between India and the U.S. This back-and-forth flow is furthered by the University of Pennsylvania Institute for the Advanced Study of India (UPIASI), CASI’s counterpart institution in New Delhi. Established in 1997 and celebrating its 25th anniversary this year, UPIASI has its own array of projects, institutional fellowships, and original research, and is home base for students and academics in India.

For three decades, CASI has provided policy-focused research and programs on India. More than 100 visiting scholars have interacted with Penn students and faculty, and over 230 students have traveled to India to participate in internships and conduct research since 2007. The center acts as a public forum by hosting seminars, workshops, and conferences, and producing the internationally read India in Transition, now published in English, Hindi, Bangla, and Tamil.

“CASI would not be the leader it is today without the partnership of our faculty, our International Advisory Board, and our many supporters,” said Steven J. Fluharty, Dean and Thomas S. Gates, Jr. Professor of Psychology, Pharmacology, and Neuroscience, at the center’s 30th anniversary symposium. “In 30 years CASI’s energy, vision, intellectual resources, and network have grown into a research institution of international excellence. I am eager to see all that CASI accomplishes in the next 30.”

Also celebrating its 30th anniversary this year is the Barbara and Edward Netter Center for Community Partnerships. Founded in 1992, the Netter Center advances civic and community engagement at Penn, bringing together the resources of the University and the wider community. The center develops and helps implement democratic, mutually transformative, place-based partnerships that advance research, teaching, learning, practice, and service. These partnerships help improve the quality of life on campus and in the community.

The Netter Center works with and serves as a model for other higher education institutions across the United States and around the world. Academically Based Community Service (ABCS) courses, in which Penn students work collaboratively with students and teachers within K-12 schools, along with their professors and other groups to develop and implement projects that help solve real-world problems, are just one example of the innovative work being done by Netter.

The center will celebrate its anniversary with special events throughout the year, including panels, concerts, and lectures.

To learn more about these programs, visit the links below: